Apart from farming, textiles and brickmaking the main occupations in Trunch have been brewing and shop keeping. There is some detail about  those who worked at the brewery and in the pubs and shops on the social, public and work buildings page.   The other trades covered on this page include the Merchant Navy, blacksmiths, carpentry, wheelwrights, shoe-making and thatching.

Some of the earliest evidence of other work that I have found is in two early apprenticeship documents. In 1597 Robert Bath, son of Christopher from Trunch was apprenticed to Barnaby Churchbird of the Cutler's Company. They produced items with a cutting edge from knives and swords to cutlery, razors and scissors.

And in 1658 Joseph Jex, son of John of Trunch was apprenticed to Robert Martin of the Turners Company.  Turners made wooden bowls, table and chair legs, balusters for stairways, as well as components used on sailing vessels, amongst other items. 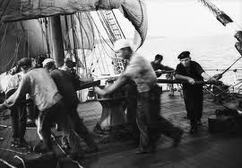 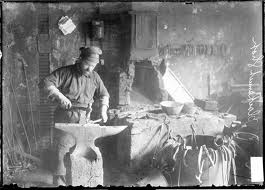 Another of the key occupations in the village was that of blacksmith and over the years there have been several of them in Trunch. The blacksmith's forge was on the North Walsham Road, but there is no trace of it left now. The earliest Trunch blacksmiths that I have come across so far are Samuel Claydon in 1693 and James Beer in 1750, who are both mentioned in documents in the Norfolk Record Office. Later on it was Robert Long (1744-1825) and his son Robert (1770-1844), followed by Buckenham Bulley and his son, James Martins and John Sussins in the mid 1800s. Several men gave their occupations as blacksmiths in the censuses but the longest serving seem to have been John Steward and the Gibbons brothers. In the early 20th. Century as well as Walter Gibbons, the trade directories list George Marler and Albert Edward Sutton. Arthur Amis, in his book "From dawn to dusk", recalls helping Walter Gibbons at the forge and the chains, nails, and farm implements that he made and repaired as well as shoeing horses. Albert Sutton remained as the village blacksmith until the 1950s. Les Loose says on Facebook that the blacksmith's shop is the building in the bottom left, in front of the carpenters shop, in the view from the air below. 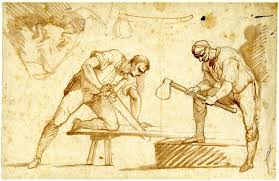 Carpentry is one of the oldest crafts but, as with weavers, the very early carpenter's names do not often survive. In the Gimingham Soke book it is quoted that in 1402 Clement Trunche was commissioned "to take stonecutters, carpenters and other labourers for the repair of the King's Castles and Manors of the Duchy of Lancaster in the County of Norfolk".  And Thomas Howes, a carpenter of Trunch, is mentioned in a 1665 document in the Norwich Record Office. There are also records of apprentice carpenters in the village - Jos Taylor in 1715, Chas Back in 1729, Henry Postle in 1777, Robert Larter in 1792 and Benjamin Bullimore in 1807. The will of Edward Pightling in 1718 shows that he was a fairly wealthy carpenter leaving sixty pounds each to his two grandchildren. 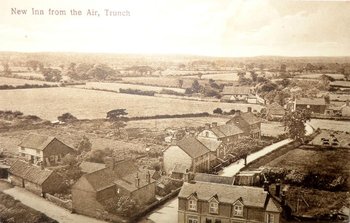 There is a lot more information available about Trunch carpenters in the 19th. Century.The Carpenters and Wheelwrights shop was opposite the blacksmiths on the North Walsham Road and it can be seen on the left of the picture opposite.  These craftsmen often worked in families in Trunch - the Richer(s), Newlands, Gibbons, Bullens and the appropriately named Turners in the 1800s.  Basic carpentry was often combined with making wheels and later well-sinking. 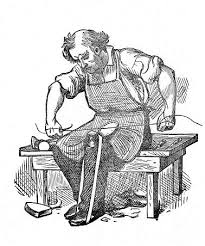 Shoe-making is also something that was done within the village for many years. In 1720 Richard Cipperton was a cordwainer (maker of fine leather shoes) apprenticed to Ben Capwin, and other cordwainer apprentices were - Samuel Bacon in 1779 and John Pilch in 1803. The 19th. Century censuses and trade directories name 14 different men who were shoe-makers but the ones who seemed to last (no pun intended) the longest were Richard Gibbons, Thomas Sexton, Henry Newland, William Benns and Samuel Lacey. In 1861 Samuel Lacey described himself as a cordwainer and the 1861 census also records a woman, Louisa Bloom, as a shoe binder, which meant assembling the parts of the shoe and possibly stitching the uppers.

The numbers of shoe-makers in the village declined during the 19th. Century as factory-made shoes came in and some men combined shoe-making with another trade. In 1911 there was just one boot maker, a William Woolston, but he had an apprentice, Alfred Mason, who went on to make and repair boots and shoes in Trunch for many years.

Other 19th. Century tradesmen no longer found in Trunch include grooms, ostlers, saddlers and harness makers as well as basket makers and warreners. In 1851 the two sons of farmer Matthew Clarke were apprentice millers and as there was no mill in Trunch at that time they must have worked elsewhere.

In the 20th. Century the organ building firm of Williamson and Hyatt were based in Trunch, possibly in the barn below left. In the picture below right Clifford Hyatt (left) and Paul Williamson are working on an electro-mechanical console for a pipe organ destined for St. Anne's church in Norwich. Click here for more information.