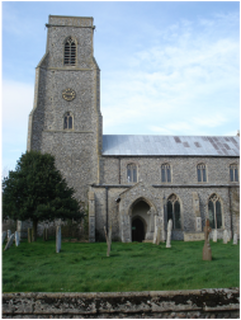 The oldest building in Trunch is St. Botolph's Church. It is mainly 14th. and 15th. Century but there are some fragments of stone in the walls which are believed to have been reused from an earlier Saxon church, which was recorded in the Domesday Book. There is much of interest in the church including a Rood Screen, a hammer beam roof and a rare Font Canopy. In his will of 1419 Clement Paston (father of the Paston Letters family) left a bequest for Trunch Church.
Click here for information about the Rectors
Click here for the Church Memorials
and here for more details - St Botolph's church 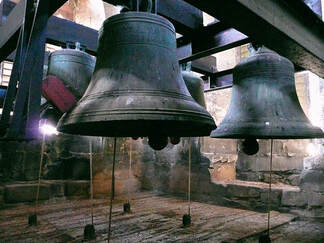 The church used to have ringing bells. In a newspaper article of 1899 it said there were three. One made by Edward Piggon and Thomas Newman in 1707, another by Thomas Newman in 1710 and one by John Stephens in 1719. A bell was sold to Warners and Sons in 1863 because it was cracked and it had an inscription "Thomas Delenne made me in 1440".

In 1717 the bells were going to be rung to celebrate the acquittal of the Earl of Oxford, who was charged with conspiracy with the French to put the Pretender on the throne, but the Parson forbade it, as he supported the Crown.

In Peter Horsefield's guide he says that the 3 bells are still there but are unable to be rung now.
One of the church brasses is in the British Museum.
A newspaper article of 1899 says that in 1842 a brass belonging to the church was found in the possession of Goddard Johnson of Martham with an inscribed name "Walter Bolkmoot" and the date 1473. The silver communion plate is dated 1560 and was made in Norwich, while a bronze alms dish is dated 1558.

I came across two interesting references to worship, when transcribing the parish records. In 1708 the Rector stated that there were 169 persons above the age of 16 in the parish and of those 100 were Church of England, 60 of the independent persuasion and 9 Quakers. He also said "popish recusants we have none" - meaning those who refused to worship in the Church of England. In 1722 there were 124 Church of England, 23 Independents, 3 Quakers and one Anabaptist. One of the Quaker families were the Claydons  - father Samuel, mother Mary and children John, Julia, Elizabeth and Samuel all born between 1678 and 1694. 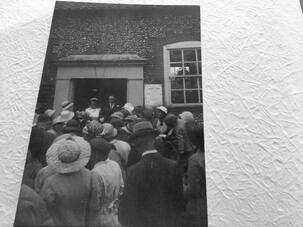 A wedding at the old Wesleyan Methodist Church in Chapel Road.

It ceased to be used as a church after the new Methodist church was built in 1937 and was used as a base for the Home Guard in the Second World War.

Later it was demolished.

The old Primitive Methodist Chapel  has been a garage since 1937 when the new Methodist Church was opened. In Arthur Amis' book he says that the centenary was celebrated in 1907, which would mean that it was built in 1807 but other sources say it was built in 1852 or 1859. It may be that the centenary was of the movement not the actual building.  In 1891 the chapel was enlarged and improved at a cost of about £80 and at that time it was said that the chapel was over 53 years old, so built in or before 1838. The garage  moved to new premises in 2014 and the building has been converted to accommodation. 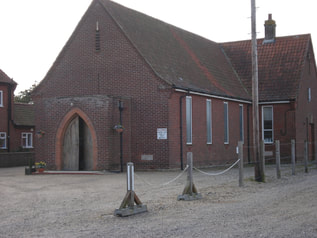 The Methodist Church on the North Walsham Road, which was built in 1937 after the Primitive and Wesleyan Methodists combined. For more details click here 1978 scrapbook Chapels
The Book "An Historical Atlas of Norfolk" (see bibliography) has a licensed, non-conformist, Congregational Church marked in Trunch in 1672. 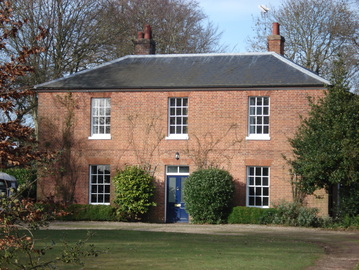 The Rectory on Knapton Road was built in 1832 and with 16 rooms (according to the 1911 census) was the biggest residential property in Trunch. Thomas Jarrett and family lived there at the time of the 1841-1871 censuses. In 1881 Ellis Price, a young curate was there and in 1891 and 1901 William Kimm and family. In 1911 John Cheshire was resident with his wife, daughter, sister in law and 2 servants. The vicar for the Trunch group of parishes still lives here.
Old Rectory In Goodrich's book "The story of Trunch" he says that Henry May told him that the earlier rectory was near the Tithe Barn. In Blomefield's essay he says that in the reign of Edward 1 (1272-1307) the rector had a Manse and 13 acres of land.
Separation from Gimingham There is a reference to Trunch in the book "A History of St. Catherine's College Cambridge" by W.S. Jones.

On the 7th. Oct. 1592 the Rectories of Gimingham and Trunch were conveyed to St. Catherine's College, Cambridge. They were a gift from Mr. John Duke of Kelsale, Suffolk. On 7th. May 1751 a petition was sent to the Bishop of Norwich begging him to consolidate the 2 Rectories and the petition was granted in August 1751. The united livings were said to be worth £210 per year.

On June 3rd. 1793 an Act of Parliament was passed for the separation of the 2 Rectories and for the building of a parsonage house in Trunch on the vacancy of the Rectory. The Act cost £325 17s 1d. The House in Trunch was completed in 1832; the college contributed £600.