Over the years there have been various military connections in Trunch.

Servicemen
Trunch men have always joined the forces. Some have been regular soldiers or sailors and others have served during conflicts. Some made use of their skills as horsemen, shoe-makers or butchers. Click here for details of over 150 men with links to Trunch who have served in the military. Most of them were born in Trunch and some lived here for a time. More details about the lives of these military men and women can be found by clicking here. Trunch military

Going away to Sea
Several Trunch men served in the Merchant or Royal Navy which must have taken them to exotic places far from Norfolk. Their service records record their characters and also any tattoos, for example Robert Allison, who joined the navy in 1901, had 1898, KATE and a fish on his left arm and Alfred Bullen had a bird on a bough on his right arm, while Henry Primrose had a cross, heart and anchor.

The Reverend Marmaduke Ward had two sons who joined the Navy and both died very young. George died of a fever on board HMI The Dragon off France at only 16 years of age and William, who was a Lieutenant in the Royal Marines, died at sea when he was 21 in 1812.

​Inevitably some didn't like the life at sea and Arthur Fuller ran away several times and was discharged after punishment for desertion in 1903. Sadly Horace Warner, who was born in Trunch in 1878, the son of the policeman, committed suicide in Tasmania after barely 2 years at sea. But Henry Withers obviously liked it serving from 1886 until 1925.

An interesting military link
In the records at the Norfolk Record Office there is an 1827 letter from Anthony Blaxland Stransham in Malta to his mother in Trunch and another from Buenos Aires in 1838. Anthony was a famous naval commander who later became General Sir Anthony and led an attack on Canton in the Opium War of 1841. I wondered how his mother came to be in Trunch, as I didn't recognise the name. However it turned out that Anthony was born in Antingham and that his mother's maiden name was Bidwell. I think she was the sister of Thomas Bidwell senior who owned and farmed from Trunch Hall on the Bradfield Road and that as she was widowed in 1838 she was living with her brother in Trunch. She died in 1840.
​
World War One  1914-18

​Life in the Village The war must have had a big impact in the village, with many of the young farm workers enlisting and some travelling to previously unknown parts of the World.  In 1914 60 members of the London County Yeomanry were billeted in the village and Arthur Amis remembered them using the Village Hall as a cookhouse and canteen.  One sad story is of Leonard Alfred Howell, who was a student when he enlisted into the Yeomanry in London in September 1914 but then died in Trunch in the November.

Arthur also remembered farm buildings being commandeered, horses taken and women and boys having to do the work of the missing men. Some of the women involved included Emily Morter who was a nurse, Alice Allison, who was in the land army and Violet Jackson who was the post-woman.

Just before the harvest in 1916 German planes dropped incendiary bombs onto Woodstall field, south of Brewery Road. Arthur says that they hoped to ignite the corn but it wasn't ripe enough.
Casualties The names and details of the men from Trunch who perished in the First World War can be found on the War Memorial page. However there are also some Trunch men remembered on other war memorials. Herbert Frary for instance, who was born in Trunch and lived in Wright's Loke, was lodging in Southrepps when he enlisted and is remembered on the Southrepps memorial and James Cutler, on the Panxworth memorial, was a Trunch man. Henry John Allison, of the East Kent Regiment, was killed in action in 1917 and is remembered on the Bacton Memorial. 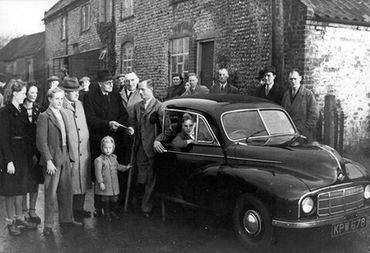 Survivors Thankfully many of the Trunch men who enlisted returned home. In the book "Death of Rural England" there is an interview with Billy Dixon from Trunch who says that "they were calling for volunteers, and several of us in the village, I should think about ten of us, went that morning down to Mundesley and joined up, took the shilling." There was a report in the Nottingham Evening Post on February 14th. 1916 which said "The Norfolk village of Trunch which has a population of about 400 can boast that every single and married man who is eligible is either serving or has enlisted."  Of the 5 Dixon brothers, 4 were old enough to join up and all 4 survived but with vivid memories.

Frederick Victor Dixon volunteered in 1915 by cycling to Cromer with Arthur Spurgeon (who was killed in action in 1918). He was sent first to Britannia Barracks in Norwich, then to Dover Castle, with Bob Rivett, also from Trunch. After 6 months training he was sent to France and then "up the line" to the front where he was in a Lewis Gun Section. The first night in the trenches was the worst as there was running water everywhere and many men got trench foot, including Bob Rivett, who was sent home for the rest of the war. Fred and others were given whale oil to rub into their feet. He then recalls years of alternation of being in the front line, being a bit further back and some times of rest. On one engagement he was injured by shrapnel and was sent to a hospital in Chester before being sent back to France. Eventually he ended up in a former hunting chateau that was housing officers and he helped in the kitchen and with the horses. He says that was the best time until he returned home to Trunch.

Some of the survivors were not unscathed however. The photo on the right shows William Cutting, who lost a leg in the war, receiving a car from the Ministry of Pensions. 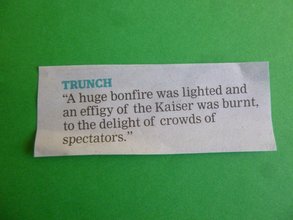 According to the Eastern Daily Press on 9.11.2018 this is how Trunch celebrated the Armistice in 1918. 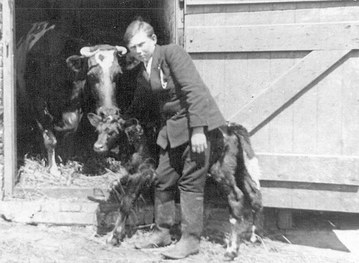 One soldier from Trunch is recorded on the War Memorial, as having lost his life in the conflict and that was Arthur F. Flaxman. Arthur Frederick Flaxman was Private 5774971, 5th. Battalion, Royal Norfolk Regiment and he died on January 19th. 1943 aged 21. He was the son of John Dennis and Elizabeth Christmas Flaxman. He is buried in the Chungkai war cemetery (12.E.14), north west of Bangkok. He died as a Prisoner of War of the Japanese and was working on the Burma to Siam railway. There is a memorial plaque for him inside the Church.

Reggie EMMANS is remembered on his grave as 1913 - 2008 "Desert Rat" so presumably he served in North Africa and Ronald Thake (1925-2014) served in the Royal Navy Arctic Convoys.

At the start of the war, Trunch was in the restricted movement zone and all strangers had to be identified. In common with other areas, road signs were removed, windows blacked out, food was rationed and children went to school carrying gas masks in cardboard boxes. Propaganda films were shown from a mobile cinema van on the Hill. There was a pillar box at Trunch Tee, a spigot motor placement at Trunch House and 3 tank traps in the village. Several air raid shelters were built in people's gardens and larger ones in Chapel Road in 1939 and in the school grounds in 1942. The steam hooter at North Walsham laundry was used to warn of air raids.

Trunch had a Home Guard formed of men not called up, who kept watch on the coast and took part in exercises with the regular army. Alec Clarke from Manor Farm was the Captain, Mr Mallett from the Post Office was the Air Raid Warden, Bullens (well-sinkers) provided an extra fire pump  and the Guard used the disused Wesleyan Chapel as their headquarters. Someone who helped the Home Guard was Lt. Col. Alexander William Straubenzee, who despite his name was a member of the English aristocracy and had gained a DSO in WW1. He was living at Trunch Hall at the time. The Home Guard also used a house that belonged to Claughton Pellew, the artist. The house was isolated half way between Trunch and Southrepps and had a telephone. It is possible that Pellew was interned as a spy at that time.

Local women including Ethel Burnett, Beryl Dixon and Rene Hicks, joined the land army and newspapers reported fund-raising for evacuee children and War charities. There was a court case in 1940 when a soldier went into the Post Office and said the Germans had landed in Kent, which started a rumour mill. He was told to "keep your mouth shut".