This page has photographs and information about public buildings, including the Village Hall and old School, as well as public houses, the Brewery and shops. 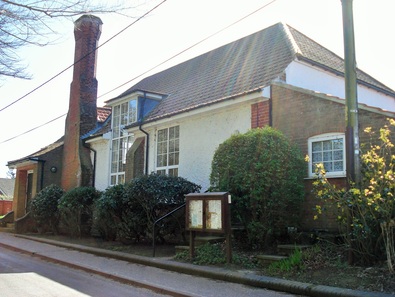 This was built in 1912 on Glebe land that the church sold to the village. There was some controversy about the ownership after the First World War but it was settled as village property. Arthur Amis, Wally Hicks and Arthur May then bought an extra piece of land for a car park. In 1973 the Hall was modernised when it was officially opened by Ralph Howell M.P. In 2019 there was a major fund raising effort to modernise the kitchen.

It is said that a school was held in the Chancel of the Church from 1646 to 1750 and holes can be seen in the choir stalls above that could have been ink wells. There are also many scratches on the wood.
Later there is thought to have been a school in Brewery Road. The Poll records have John Lacey as a schoolmaster in Trunch from 1806 to 1817 and the parish records record a schoolmaster, Timothy Flint living in the village in 1833 and 1836.

The National School "for the poor of Trunch" was built in 1852 on the corner of Back Street and Gimingham Road. It was Church of England and had 2 rooms, separate entrances for boys and girls and a playground across the road. It had room for 72 children but took up to 90 at times. Originally it took children from 3 to 11 but later children over 8  transferred to Knapton, Gimingham or Mundesley. Arthur Amis' father could remember paying 2d a week to go there.

After the closure the school became a Men's Club and then a site for Cyril Larke's grain dryer until in 1970 it was bought in a derelict state by Arthur Amis, who was living in the School House next door. He demolished it to make way for a garden and greenhouse, leaving just one wall, that can still be seen today.

School teachers in Trunch included Daniel Holl and his wife Eliza (nee Wiggett) from 1841 -71, Susan Whitworth in 1881, Miss Knights in 1883, Edith Bates in 1891, Mrs. Elizabeth Sharrod in 1895, Alice Arthurton in 1901, Edith Marshall in 1911 and Misses Lloyd, Mason, Page and Thompson. It was usual for the head teacher to have come form outside the village and for them to be assisted by a village girl in training. Click here for a full list of teachers and monitresses.

Betty Sharrod, the headmistress in 1897 is on the far left of the back row and Arthur Amis, who later bought the school, is third from the right on the front row of the 1910s picture. 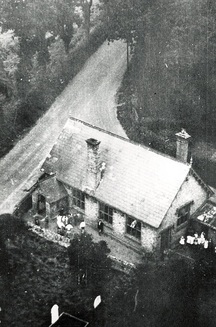 
​
THE CROWN PUBLIC HOUSE
Goodrich (1939) says that in the 16th. Century the old Crown was held under Copyhold from the Manor of Gimingham and that it had "massive walls and heavy oak rafters".

Click here for more information about The Crown at Trunch
The pretty thatched Crown was burnt down in a fire in 1941. The thatch was replaced with a flat roof and the pub was called "The Half Crown" for a while until a new pub was built in 1953. 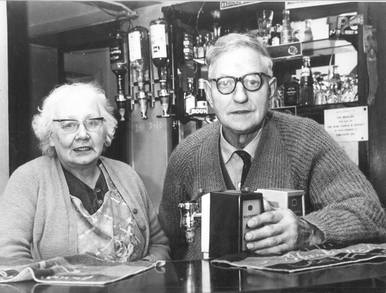 William and May Dixon retiring in 1971

The brewery was started by William Primrose in 1805 and later run by his son Philip. When William died he left the brewery to Philip together with the Malthouse and public houses. Some of the brewers who worked in Trunch were Samuel Hole 1841, William Amies 1851, Philip Primrose 1861 & 1871, Betsy Primrose (Philip's widow) 1881 & 1891, Oldman Carter 1901, Edward Woodyatt 1911, Cuthburt Smith about 1920, Thomas and Arthur Jones 1930 until about 1952. According to the Electoral register Willoughby Dixie Churchill owned the brewery from 1907 until at least 1915. Click here for more about Trunch brewery on the village web-site.
﻿Some of the products of the brewery are shown above and many of the old brewery bottles have been found in the village. Trunch brewery was also a pioneer in the production of canned beers. The bottling plant was built in the 1920s and in 1939 the Brewery had its own social club building. The brewery building was next to the road but after it was sold to Churchill and then Morgans it was demolished in 1952 and there is now nothing left. ﻿
For more about Trunch bottles click here 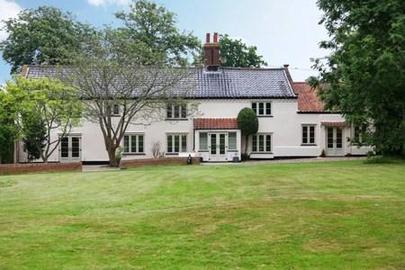 What is left is Brewery House which was built in 1837 for the Brewery owner. On the 1839 Tithe Map it is shown as being owned by William Primrose, with the Reverend Robert Marler Cremer as the tenant. This is a view of the back of the house which is the best outlook as the other side was close to the Brewery building.
SHOPS

In the past the village has had several shops, mostly near the Church. The old Post Office was in Church Street and was only converted to a house in recent years. It always seems to have been a general store as well as a post office. The shopkeepers included John French 1851, Mary French 1861, Hannah Watts in 1864, Benjamin Buck 1871-1891, Robert Wall 1901 and Robert Young 1911. They were often drapers and grocers as well as postmasters. From March 1964 until the autumn of 1976 David and Kit Skelton were the postmaster and postmistress and they lived above the shop with their children Gina, Andrew, Richard, Denis, Mary and Paula. Later the Mallets owned the Post Office. There was some re-building of the Post Office in 1910 and it finally closed and was relocated to the present Corner Stores (in the old New Inn) sometime in the 2000s. 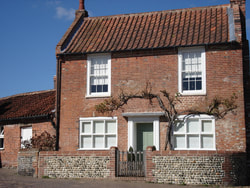 The Shambles
The Shambles on the Hill was a butcher's shop and slaughter house for much of Trunch history. I have been lucky enough to see the deeds of this house which cover the period from 1785 - 1961. (Many thanks to Edna Taylor and son) Until 1902 the property was copyhold from the Manor of Gimingham and so the deeds give insight into the workings of the Manor. For most of its history the house was tenanted. John Chapman was the butcher around 1830-1840, Thomas Chapman, his son, from 1841-1871, Edward Seago in 1881 and John Spurgeon from 1891 until 1936. Then Ralph Spurgeon and his wife Gwen took over.

There was also a pork butchers in Church Street, owned by the Wegg family - Richard in 1881 and 1891, William in 1901 and Thomas in 1911. The shop closed after WW2 and the wooden building was demolished.

Fullers, a grocers, is mentioned in all of the censuses from 1871 until 1911. In his book Arthur Amis remembers Mrs. Fuller as an "old-fashioned lady" who sold loose flour and sugar as well as Woodbines and sweets in the early 20th. Century. Hazel Taylor bought the premises in 1994 from the Stricklands and thinks that the shop closed in the 1960s.  At a photo exhibition it was suggested that the shop closed in 1969 but Gina Menon (nee Skelton) thinks that it closed around 1965.

This building in Church Street was "The Stores" run by Philip Pike who did an oil delivery round in 1911. He was also a Wesleyan Methodist preacher. It was still operating as a general store in 1970. The other main grocers was at the Post Office mentioned above. At one time there were also other shops in Chapel Street and Back Street.
​There was also a little wooden shop in Back Street for general goods run by Harry Burton. I have seen it in a 1934 photograph but it was later demolished. 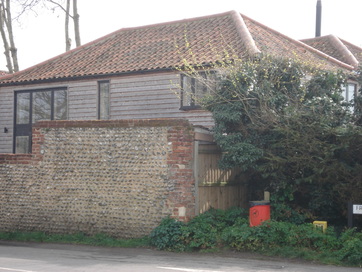 Now converted to a house this old barn was the site of Trunch Builders for many years. Before that it was used for organ building in the 1950s.

I think there was also Gibbs Builders based at Dairy Farm on the Hill.

There was once a blacksmiths and a carpenter's shop in North Walsham Road but all trace of them has been lost.