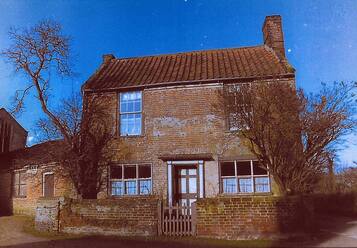 The Shambles Butchers Shop
The Chapmans were butchers living at the Shambles from 1816 when John Chapman (1776-1839) was left the Shambles in the will of his father-in-law Isaac Stamp. After John's death the bucher was Thomas Chapman, who at the time was a butcher in Mundesley.

John's son - William Stamp,  who was left all of John's assets, left the village to become a wealthy farmer in Potter Heigham.
Thomas Chapman (1814-1888) was the Trunch butcher from about 1840 until 1871 but he seems to have had a difficult time. The Shambles papers reveal that he borrowed considerable sums of money and in 1872 had to surrender the tenancy to George Gordon of Mundesley and the house, butcher's shop, slaughter house and lodges etc. were sold. In 1877 Maria, Thomas' wife died in the Workhouse, as he did in 1888.
Thomas and Maria had a daughter who died as an infant and a son Edward Chapman (1843-1895?) Edward was also a butcher and a baker. After his marriage to Ann Rump in 1865 he moved to Southrepps and then to Sunderland.
Mysterious Newspaper Reports I have come across 2 strange newspaper reports relating to Thomas and Edward. In 1839 Norfolk Chronicle 17 Aug. Marriage of Thomas Chapman butcher of Mundesley, nephew of the late John Chapman of Trunch to Esther Ann Phillis Suffling of London. I cannot find any confirmation of this marriage, or of a brother of John who had a son Thomas,(making him a nephew) although an Esther Chapman did die in London in 1841 before Thomas married Maria. However when he married Maria he said he was a bachelor and that his father was a butcher named John.

The second mystery concerns Edward. 1863 Norfolk News 26 September. On Tuesday last at St Nicholas Church marriage in Great Yarmouth. Mr Edward Chapman to Virtue, only daughter of Mr. Benjamin Buck of Trunch. Again I can find no confirmation of this and later Edward married Ann and Virtue married Henry Bugden May in Trunch in 1871 both stating that they were single.

Harness making
The Chapmans above all seem to have decended from families who lived in Thurgaton, a small village quite near Trunch, but there was another family who came from Northrepps. Robert Chapman (1790-1876) was the son of Stephen and Elizabeth and he lived in North Walsham before moving to Trunch and working as a harness man. He had married Hannah Wright in North Walsham in 1828 and their first daughter was born there but by 1829 they had moved to Trunch where 4 further children were born, 3 of whom died at a young age. Hannah died in 1847 and Robert married Hagar Rookwood, a widow from Saxlingham Nethergate in 1853. Robert's father was said to be a farmer, he himself a harness maker and Hagar's father a butcher. In 1848 he was the subject of a serious assault after a dispute about rent payments and his eldest daughter died aged only 23 after "a severe and long afflication which she bore with Christian fortitude". 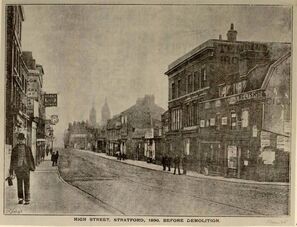 Robert's surviving son, William (1837 - 1906) had an interesting life. By the time he was 23 he was living in Lambeth and working as a draper's assistant. Ten years later, still only 33, he had his own drapers business in Stratford High Street, West Ham, employing 8 assistants. He was also married with a young family but his wife died shortly afterwards. However he married again and his business grew taking over several more premises in the High Street and having servants, assistants and apprentices. In 1911 his wife was still living in Essex with their 2 youngest sons and William was in Great Yarmouth with his daughter Ada but I think he was back in West Ham when he died in 1906.

If you have any more information about this interesting family, please contact me.