The Norfolk Heritage Explorer website gives 41 records of archaeological finds in Trunch. They include:
A Mesolithic flint axehead (before 4000BC)
Neolithic Axeheads and enclosures (4000-2200 BC)
Bronze Age pottery shards (2600-700BC)
Iron Age cropmarks of settlements and burial mounds (800BC - 43 AD)
​Roman cropmarks of enclosures and tracks (43-410 AD)
Medieval pottery production site (1066-1540 AD)
A 1592 sixpence. 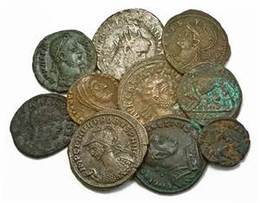 Many of the finds listed above were located by aerial photographs but there are also people in Trunch finding objects by metal detecting and some of these were on display on the paddock in July 2016. They included coins of many periods including Roman. There was also an Iron Age linch pin from a cart, a Saxon strap end and from the Medieval period - an ewer, a cooking vessel, a seal matrix and a buckle. One of the post Medieval pieces was a silver hunting whistle. ​ 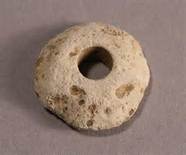 
​
I found an interesting link with Trunch on the Historic England website. It says "Southrepps - Stump Cross. Remains of cross and base. Medieval. Stone. Base found by road workers in 1932. Chamfered shaft cl .5m high with remains of tenon (wood) on top was retrieved from Trunch Rectory garden and set on top. TG2622736424"  This is the cross at the crossroads as you come into Southrepps on the Gimingham Road. The Norfolk Heritage website says that it is the remains of a stone cross and that the remaining cross shaft is around 1.2 metres high and sits on a square plinth, and may have stood as a parish marker or a demonstration of faith.

​If you have any information about old objects found in Trunch please contact me.