There have been and still are a number of wells in Trunch. The most famous is the Trunch Town Pump on the Hill. The sign on the present wooden pump says that it was erected in 1922 to replace one that was made in 1896. It says it is 60 feet deep. An 1880 photograph shows a flint well on this site, which was there before the first pump. At the time of writing (2014 - 2016), the Parish Council are looking into renovation of the pump. 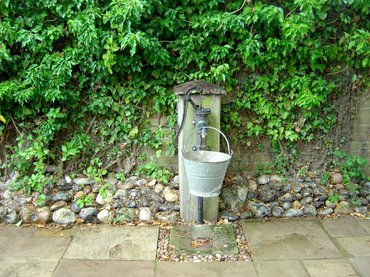 Pump at Brewery House
The British Geological Society has records for 11 wells in Trunch. Most of them were made by Bullens - wellsinkers of Trunch. When the main visits were made in 1960 the wells at Miller's Farm, Manor House, Cosy Nook, Old Post Office, White House Farm, and the one at a house on the corner of Bloom's Turn and North Walsham Road were all still in use for houses and/or farms.


Click here for full details of the BGS survey of Trunch wells. However many of the domestic wells were not covered by the survey. A 1960 map shows a well at the cottage opposite Osborne House in Brewery Road and there are two more below. 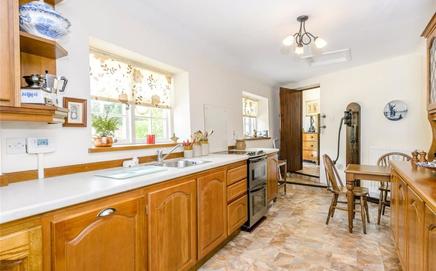 This view of the kitchen at Vine Cottage appears to show an old pump on the wall.

​
BULLENS WELL SINKERS Many of the wells in Trunch were made by this firm. It  started from a family of carpenters who moved to Trunch from Witton. Sam was a carpenter and wheelwright in 1841, 51 and 61. William, his son, also born in Witton, was a carpenter and wheelwright in 1861 and 1871, while Alfred, his son, started as a carpenter and wheelwright and described himself as a well sinker in 1901 and 1911. Alfred's son Herbert was an assistant well-sinker in 1911 and in Arthur Amis' book there is a photograph of him and his brother Horace working as well-sinkers in 1959. More details are on the BULLENS family page.
​
On a sad note the Manorial Records state that in 1268 a Roger Suneman was found drowned in a well in Trunch. The verdict of the investigation was - Mischance!

PONDS
The Tithe map of 1839 shows at least 12 ponds in Trunch. Some of them may have been natural and some artificial. They were used for drainage, irrigation, watering animals, washing clothes and possibly for retting (soaking to separate fibres) of hemp or linen or for washing wool. 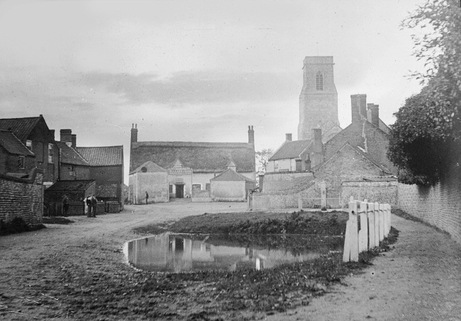 Town Pit Trunch
The most famous pond in Trunch was the Town Pit on the Hill. It was drained sometime in the 1950s I think and filled with chalk from a well that was being sunk in North Walsham. It was said that it dried up in the summer, as can be seen left, and that it then looked and smelt unpleasant. The land was grassed over and turned into a green, now registered as common land. There are some more photographs of the Town Pit on the old photographs page. 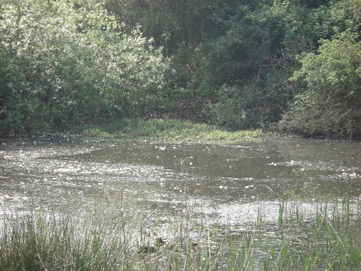 Pond in Mundesley Road
Arthur Amis called this pond in Mundesley Road, Russia or Rusher Pit. He also mentions a pond in a clay pit in Brick Kiln Road, presumably where the clay was dug out for the bricks, but there is no sign of it today. Similarly I think that Cuttings Pit in Brewery Road was where clay was dug out near the brewery but it has been filled in.
A STREAM
The stream in Trunch is along the South Western edge of the parish and forms the parish boundary for part of its length. It is called Fox's Beck in Lower Southrepps and Bradfield Beck as it flows towards the River Ant near Swafield (North Walsham and Dilham Canal)

The small stream has cut a marked valley and there is a smaller stream parallel to the main one and also a side valley from Warren/Brewery Road, although the water in it is now only intermittent. Some of these little streams have been straightened over the years. Even though there has been drainage much of the land near the streams is still marshy with coppiced woodland, wild garlic beds, and grazing land - much as it probably was hundreds of years ago. 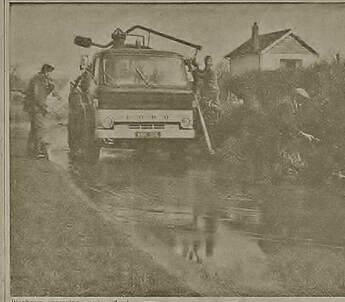 Flooding in Wright's Loke in 1969
TOO MUCH WATER
Eastern Daily Press April 17th. 1969 "The people of Trunch are demanding something should be done to prevent many of their roads from becoming flooded after every heavy rainfall. Yesterday a pump arrived in the village to temporarily relieve the position. On Tuesday, the roads leading to Gimingham, Mundesley, Knapton and Bradfield were all under water, and there was flooding in Wright's Loke."

Today in 2020 this is still a problem in the village.