In the early 19th. Century people who were born in Trunch often moved around neighbouring parishes as farm labourers looked for work but it was quite unusual for people to move further away. However as the century progressed and transport improved some people did move to other parts of Britain and occasionally aboard. People also started to appear in the village who had come from far away.

One interesting name is John FREEMAN who was staying with the schoolmaster in Trunch in 1851 and who gave his birth place as Van Diemans Land which became Tasmania. In 1861 he was with his parents in Bacton and his father was Whiteman Freeman, a coastguard. It turns out that his father was from Norfolk but in 1832 he was in London, the owner of a ship, the Edward Lombe, and he married a London girl. So it seems possible that they sailed to Tasmania, where John was born.

Another fascinating one is Ellen FORREST, a widow, born in Stockport, who was living in Trunch Hall in 1901 with her two daughters, who had been born in the Channel Islands. The 1861 census shows that she was married at 17 to Charles aged 35, a gentleman, and they already had a daughter - Ellen de Jersey. In 1871 they were all living in Guernsey in the Channel Isles  but by 1881 she was a widow and after this seems to have travelled all over the country with her daughters.

I have made a spreadsheet to trace where Trunch residents have moved - click here to see it -  Trunch travellers trace Places outside Norfolk are shaded in pink for people coming to Trunch and red for those who left. It is interesting to see that some families were more adventurous than others. In some cases rich families such as the Primroses, Greenhills and Mays obviously had money to travel and contacts in different areas, but mostly it was poor farm labourers who moved to Northern England to work in coal mines or factories. Brothers, older parents and neighbours are often found living in the same places.

For example two groups of people from Trunch  were working in the cotton industry in Lancashire in 1861. The industry had been booming in 1860 and the mills advertised for workers in Norfolk. My own ancestors went from Norwich, but as they were silk workers, I was not surprised, but I wonder if the Trunch people had worked in textiles before. In any case the GOWING family who had lived in Trunch went to Newchurch in Lancashire, together with Sarah Allison, Sarah Cutting and Harriet Self, all from Trunch. While the family of Joseph SELF went to Whitworth in Spotland, Lancashire. The family group included 2 aunts and an uncle who worked in the cotton factory as well as a son and 2 daughters including one aged only ten also working in the cotton factory.
It must have been a sharp contrast to life in Trunch, with buildings and views such as those above. The cotton industry in Lancashire went into decline after 1861 but the Gowing and Self families did not come back to Trunch. Thomas GOWING died in 1870 but his widow and 2 of his daughters were still living in Lancashire and working in the cotton mills in 1871, while James SELF went to work in the coal mines in Northumberland.

Other Trunch men also made their way up North to work in coalmines, factories or shipyards, including Alfred, Harry and Robert ALLISON, Herbert and James BLOOM, James BOULTER, James BRACKENBURY, John and Thomas BULLEN, Albert BULLEY, Alfred and Henry COLMAN, George COOPER, and James and Walter FLAXMAN. Albert FRARY is interesting as he was one of the first miners at the Askern Colliery near Doncaster when it opened in 1911 and at the time of the census he was living in a hut with about 20 others before the new miners' village was built. William REYNOLDS worked as a docker in Hartlepool, Thomas RIVETT as a ship riveter in Wallsend, and Edward SEAGO took his whole family to West Hartlepool.

Women often left the village to work in service before they got married. One was Eliza MARTINS who was born in Trunch in 1850 to James Martin, the blacksmith and his wife Jane, nee Gibbons.  In early 1871 she was a servant in Hampstead, London and in late 1871 she married John Pigney, a carpenter, in London. They went on to have 7 children, but by 1891 Eliza was a widow working as a char woman in Fulham, London. She died aged 90, in Edmonton, London in 1940. Men also worked as servants, for example, Francis BLOOM was a butler in large houses in Sussex and then in a cotton manufacturer's house in Lancashire.

London was also an attraction for other people including Brooks LOVE, the baker, who was widowed, but married again in London, and several of the WORTLEY family also ended up in London as did two of the DIXON boys  and Frank ALLARD who drove a stage carriage in Hackney. Harry BECKERSON who was born in Trunch in 1828 joined the police force and rose to be an Inspector in London and James BARBER worked there as a tailor.
One family who moved to America were the FRARYs. On the 21st. April 1905 John FRARY, who had been working as a farm labourer in Trunch and Gimingham, was on a ship from Liverpool to New York with his wife and 8 children. Ireland WATTS and his sister also went to the USA and several members of the STOREY family went to Canada after 1881. 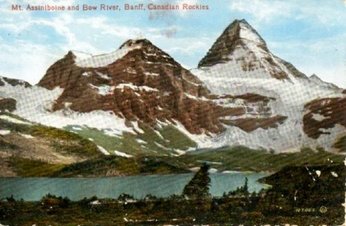 In 1913 Kathleen Mable MAY sent this postcard from Canada to Trunch. She was visiting her brothers - Henry Randall and Frederick Horace who were both farmers in Canada. Frederick had a rather nasty end, when he was gored by a bull at his farm in Vancouver in 1943. Their other sisters are also shown as visitors to Canada on passenger lists.

​Harold HICKS also spoke about his brothers coming back from Canada to help on the family farm in the 1920s. A branch of the DIXON family also went to North America and Timothy BLANCHFLOWER's wife came from Canada, so he may have travelled there. 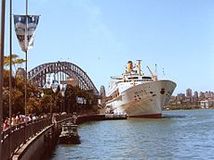 The Oriana in Sydney
In 1960 Alexander CLARK and his wife Nancy who lived at Manor Farm were passengers on the maiden voyage of the Oriana to Australia, possibly as emigrants.

Click here for more details about some of the Trunch travellers