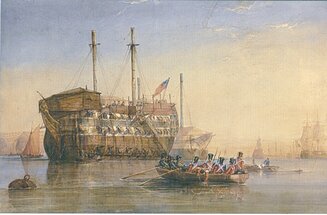 Prison Hulk Retribution
The Colmans are an interesting family, being mostly agricultural workers, poor at times and sometimes involved in crime, as well as having several children born out of wedlock. The name had an added E to become Coleman from time to time and generally after 1880.

The earliest Colman that I can find in Trunch is Stephen who married Elizabeth Woodrow in North Walsham in 1772. They had 7 children in Trunch, 3 of whom died in infancy, but it is their son Stephen who is most intriguing. He was involved in a court case in 1809 with his sister-in-law Ann, when it was said that he stole a fat turkey and 3 geese from Sam Wortley of Trunch and pork, mutton, 6 loaves of bread and a yard of linen from Charlotte Etheridge of Knapton.


He was sentenced to 7 years transportation and held in the prison hulk Retribution (a decommissioned ship) at Woolwich. However in 1811 he was appealing saying that he had been corrupted by Ann, with whom he was living. A petition to the Prince Regent for his release was signed by most of the wealthy farmers in the Trunch area and this probably helped his cause.

It seems that he was not transported, was pardoned in 1815 and married Elizabeth Pratt a widow from Southrepps in 1816 and they went on to have 11 children.  In 1839 he was living in a cottage owned by the Trunch Trustees, which may have been a poor house. He was a widower, living with his daughter Rebecca in 1851 and he died in 1859.

Ann Coleman however, who was involved in the case mentioned above was transported to Australia for 7 years. The Queensland records state that she was convicted in Norfolk on the 11th. of January 1809 and transported on the ship Indispensible with 61 other women, one of whom died on the trip. The ship sailed from England on March 2nd. and arrived in Port Jackson, Australia on August 19th.  It must have been an awful journey in a sailing ship, across the Atlantic to Rio de Janerio and then round Cape Horn and across the Pacific. The records state that her spouse was Philip and it seems that when she was transported he joined the Royal Navy.  I am trying to find out what happened to their two small daughters.

Rebecca is the next interesting Colman.  She had 9 children - all out of wedlock. This suggests to me that the children may have had the same father, who for some reason was unable to marry Rebecca.  She worked a charwomen and lived all of her life in a cottage in Back Street, which she appears to have owned as she was eligible to vote in local elections from 1906 until she died aged 83 in 1912. Rebecca's sister Mary also had 2 children with no father mentioned in the records and her brother Philip was involved in a court case in 1848, when a pig was stolen from a farmer.

There was also an incident in 1862 when the Norfolk Chronicle reported that there was a rumour in the village that a man named Coleman had been poisoned by his wife but the inquest found that he had died from natural causes. The parish records identify him as Stephen Colman (Rebecca's brother) who was buried on Nov. 21st. 1862 aged 42 years.

Life was hard for the Colemans - several are mentioned in the school records as suffering from diseases and learning difficulties. Some of the family moved away from Trunch looking for a better life. Rebecca's cousins Alfred and Henry moved firstly to Norwich and then to the North of England and her son Henry moved to Norwich to work as a railway porter. 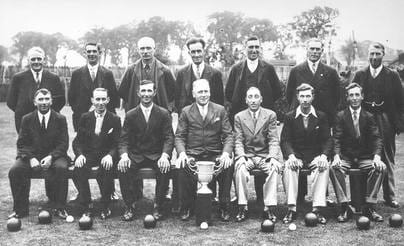 Trunch Bowls team 1936
In the 20th Century Colemans were still living in Trunch. Walter, Rebecca's grandson, served in WW1 and Colemans are named in bowls and football teams. John Coleman is second from the left on the front row of this 1936 Trunch bowls team photo. And John William Coleman (possibly the man in the photo) is buried in the new cemetery. There is another photo of John Coleman working at the Brewery.

Click here for more detail about the Colmans of Trunch

If you have any more information about the Colmans or Colemans of Trunch please contact me.