Sacred to the memory of Revd. Marmaduke Ward A.M. (Rector of Horsington in the Diocese of Lincoln and many years Curate of this Parish). He died 13th Octbr. 1813 aged 64 years. Also Eleanor his wife died June the 26th 1823 aged 65 years. Harriot their second daughter died 21st of Janry. 1809 aged 23 years and William their second son a Lieutenant in the Royal Marines died at Sea 24th Decbr. 1812 aged 21 years. Also to the memory of Revd. Philip Ward son of the above Marmaduke and Eleanor Vicar of Tenterden / Kent died 16th Janry. 1859 and Horatia Nelson his wife died March 6th 1881

Sacred to the memory of John Daw Esq. late of Saltash in the County of Cornwall who died at Trunch Rectory September 3rd 1842 aged 68 years. And of Mary his wife who died at the same place July 2nd 1843 aged 41 years. Their remains are interred near this place. God so loved the world that he gave his only begotten son that whosoever believeth in him should not perish but have everlasting life.

The word of our God shall stand for ever Isaiah 40.8 To the glory of God & in loving memory of Willm. Fredk. Kimm M.A. late fellow of St. Cath. Coll. Camb. Rector of this parish 1882-1910 called to higher service on Ascension Day 1912 He was a man of high principle a friend of the poor a faithful teacher & a dilligent student of God's holy word

Sacred to the memory of George Ward eldest son of the Revd. Marmaduke Ward of this Parish a youth of the most amiable manners and promising hopes who died of a fever at Brest on board His Majesty's Ship The Dragon (in which he served from the 8th of August 1798 to the day of his death) on the 4th day of March 1800 in the 17th year of his age.

Here Lyeth the body of William Woorts / Gent. who married Elizabeth the eldest daughter of Riches Brown of Fulmodeston / Esqr. He departed this life the 25th day of August in the 60th year of his age in the year of our Lord 1694. [Arms-... three lions rampart / 2 and 1 / impaling two bars between three spear heads 2 and 1.]

In memory of Elizabeth Creasey wife of Benjamin Creasey of [....] and daughter of Daniel and Ellen England departed this life the 17th day of June 1721 in [....]8 year.

[Blomefield mentions a gravestone with:- Hic jacet mag'r Robt' Cantell quo'd rector isti. ecclie qui obt. 1 Sept. Ao Dni. 1480. This is now gone / as also are the arms - Arg. a fess between two chevrons sa. / which he gives as being in a window here.]

Beneath this stone resteth the body of Marmaduke Ward clerk Rector of Swafield and Beeston regis in this County and 37 years Curate of this parish. He died Jany. 31st 1772 aged 61 years. And near it are deposited the remains of Ann his first wife who died March 30th 1739 aged 47 years leaving no issue. Also of Mary his second wife who died Septr. 5th 1763 aged 49 years leaving issue 3 sons and 4 daughters of whom are buried at a small distance from hence towards the church door 1st Mary Ward eldest daughter of the said Marmaduke and Mary who died Janry. 13th 1775 aged
years. 2nd Jane Ward their youngest daughter who died Jany. 21st 1781 aged 22 years. 3rd George Ward clerk their second son who died July 16th 1783 aged 28 years. 4th William Ward clerk their youngest son Vicar of Great Barford and Roxton in the County of Bedford who died Octr. 9th 1827 aged 32 years. Also of Elizabeth his wife who died Septr. 24th 1831 aged 78 years. Also of Ann Ward who died March 29th 1827 aged 76 years.

Here resteth the Body of William Harmer the son of William and Mary Harmer some time of this Parish / Gent. who resign'd this life the 28th of August 1720 aged 22 years. Here also resteth the Body of Ann his sister who died the 15th of August 1696 aged 11 years. Also the body of Robert Harmer / Gent. brother of the said William Harmer who died November 9th 1763 aged 68 years. And also of Elizabeth Bourne / widow their sister who died Jany. 18 1766 aged 76 years. [Arms- Quarterly / on a bend three lozenges.]

Here lyeth the body of Daniel England who died the first day of October 1694.

Here lyeth ye body of Elizabeth Worts daughter of Thomas Worts and Elizabeth his wife. She departed this life the 12th. of May 1688

Here resteth the body of Ellen relict of Daniel England who departed this life April ….17 -8 in the 17 …of her age

In memory of Arthur Frederick Flaxman born June 8 1921 died as a prisoner of war in Thailand Jan 19th. 1943

In memoriam Richard Gwyn buried in Southrepps Churchyard 18 July A.D. 1894 Looking unto Jesus the author and finisher of our faith

(Perhaps this was the first restoration of the chancel roof?) 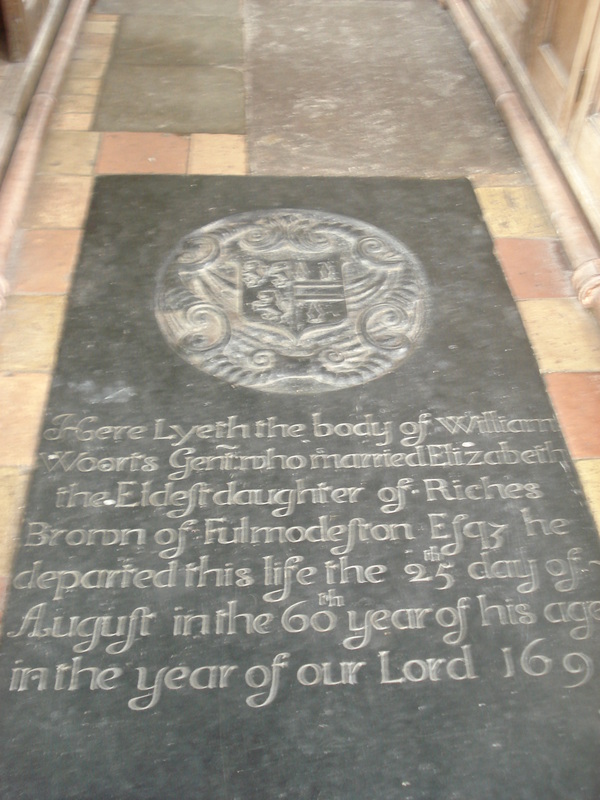