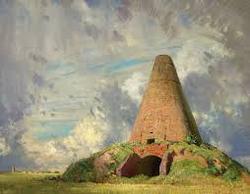 An old brick kiln
Bricks were made in Trunch for hundreds of years and although they are no longer made there is plenty of evidence left in the name of a farm and a road and brick buildings. Brick Kiln road is where clay was dug and where there were two kilns. Arthur Amis says that the first one was square with brick walls, was about 20 feet high and finished burning about 1910. The other one was behind Brick Kiln Farm and it stopped working about 1916 before being demolished by George Hicks, who owned the farm, in 1920. An old OS map shows the kiln on the north side of Brick Kiln road with the clay pit on the south side north of the farm.

The traditional way of making the bricks was to extract the clay in the autumn or early winter and to temper it (mixing clay, water and additives) in winter or early spring. Then the bricks would be moulded and dried in late spring or early summer and fired in summer or autumn. The firing in the kiln took less than a week whereas when a clamp was used it took 6 weeks.

When Richard PRIMROSE died in 1708 an inventory of his possessions was taken for probate and among the list of interesting items was "a brick kiln safe" which held a stock of red and white bricks and pavements valued at £6 3s 4d.
Several brick makers are mentioned in the Trunch records.
1841 Charles and Sam Fuller and William Self
1851 Sarah Dyer, a brick and block makers wife was living in the village
1858 Thomas Fox, a brick and tile maker
1861 William Self as a shoemaker as well as a brickmaker journeyman
Other brickmakers - William Buttle and Richard Wegg
1864 Charles Greenacre as a farmer and brickmaker Brick Kiln farm 1861
1881 & 1891 Edward & William Wegg - brickmakers
1892 John Hewitt brick manufacturer
1901 Herbert Leveratt, Ernest Amies, Arthur Amies, Edward Wegg (and son) brickmakers
1911 Edward Wegg brickmaker and Francis Marshall brick & tile maker
It is likely that roof and floor tiles and drainage pipes were made in Trunch as well as bricks. Some of the brick makers had other jobs as well and several of them were also bricklayers.

Some of the houses in Trunch have bricked up windows as a result of the Window Tax. This was introduced in 1696 as it was thought to be fairer than Income Tax and easier to collect. At first houses with over 10 windows had to pay the tax but this varied over the years and got as low as 6 windows in 1808. The tax was eventually repealed in 1851 as it was seen to be unhealthy.

I have in my possession a letter from the Trunch Brick and Tile Company which had a registered office in Trafalgar Terrace in Mundesley. The secretary, Alfred Woolley, is enquiring of a solicitor in Aylsham about whether a field in Trimingham is open for purchase. The letter was written in the 1890s and it may be that they wanted the field to extract clay for brickmaking.

Trunch bricks were in the news in 1968 when Colin Wade used yellow bricks instead of the Council approved red ones (because of a shortage) when he built two bungalows in the village. At first he was told that he had to demolish the bungalows but in the end he just had to change the tiles.