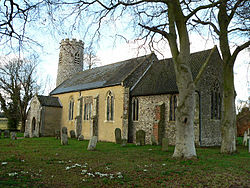 All Saints Church, Gresham
Richard Wegg (1765-1842) is the first Trunch Wegg that I have come across and I think that he was born in Gresham - a nearby small village. He was the youngest child of John Wegg and Rose (nee Wilkins). Rose was certainly John's second wife and probably his third. Several of his children had died in infancy, as was common at that time. Richard meanwhile was working as a labourer and living in Trunch at the time of his marriage to Mary Steward in 1791. They had at least 7 children, including twins, who unusually for that time, survived infancy but died as young adults. 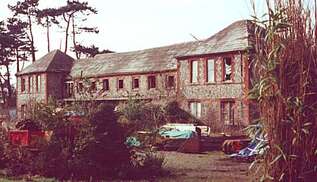 West Beckham Workhouse
The story of one of the twins, Thomas Steward Wegg (1809-1846) is very sad. He married Rebecca Brown in 1829 and they had 6 children before 1839. However by 1841 Rebecca was on her own in Trunch with 5 of the children. Thomas was not recorded as being in the Workhouse but he died there in 1846 and it seems that all of the family ended up there until Rebecca herself died in 1849.

Shortly after this, the Gimingham Workhouse was closed but the 1851 census records the 3 youngest children - William (fisherman aged 17), John (labourer aged 15) and Mary (aged 13) in the West Beckham Workhouse. I could not trace the boys after this but Mary did leave the workhouse and found work as a cook in Suffolk.
The other sons of Richard, - Robert Steward and William  carried on the line in Trunch.
Robert Steward Wegg (1800-1873) was an agricultural labourer, married Elizabeth Saxon or Laxon, and had at least 4 children in 3 different villages around Trunch, where he probably went to get work, although he mostly lived in Gimingham. His son Thomas born in 1825 in Bradfield, also worked as a labourer in various local villages but in the 1861 census he was working as a stoker in County Durham and in 1871 he was missed from the census with his wife describing herself as a "fisherman's wife".

William Wegg (1802-1879) married Elizabeth Lowe from Smallburgh in 1824 and they had 8 daughters and two sons. William worked all his life as an agricultural labourer as did his eldest son, also William. His second son, Richard however, started a brick-making and butchery dynasty in Trunch. William's granddaughter Anna Julia was killed by lightening at the age of 29.
Richard Wegg (1830-1908) started work as an agricultural labourer but by 1861 he was also brick-making and in his later life he was a master butcher.  He and his wife Harriet Lark had 3 boys - John, Edward and Thomas William who became blacksmith, brickmaker and butcher respectively.

John Wegg (1852 - 1915) In 1871 John, aged 18,  was a blacksmith's apprentice in Trunch and already married with a 9 month old child. After this he moved to become a blacksmith in Bacton and finally in Happisburgh. He and his wife Mary Ann had 5 sons, who became a farm baliff in Lincolnshire, a gardener, an engineering labourer in Northumerland, a road labourer and a fisherman.

Old Norfolk bricks
Edward Wegg (1854 - 1937) had a very long life and while starting off as a gamekeeper's apprentice he soon turned to brick-making in Trunch. He married Maria Steward from Knapton and had 8 children, 6 of whom were alive in 1911. Both of his sons worked with him for a while.
Thomas William Wegg (1857-1930) was one of quite a few Trunch residents who used their second name at times rather than their first, which can make keeping track of them a bit of a challenge, especially as William was a very common Wegg name. He also worked as a brick maker when young but then became a butcher like his father. They were never the main butchers  who lived in the Shambles; the Weggs were pork butchers in smaller premises in Front Street; famous for their meaty sausages. Thomas William married Ann Smith from Suffolk and they had 9 children including 6 girls and a son who became a butcher in Mundesley. 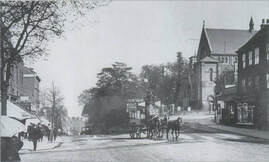 Hampstead 1902
It was common for teenage girls to go into service before they married, usually somewhere local but in this family 3 sisters and their cousin were working in Hampstead in London in 1911. One was in the house of book publisher, another a school principal and one in the home of William Shuter a pioneer of submarine telegraph cables. You would imagine they had some good tales to tell of life in the big city.
Click here for more information on the Trunch Weggs
Click here for some family trees and census returns