Bushells appear in the Trunch records from the 18th. Century and the family had links to Knapton and Devon. John BUSHEL (? - 1771) married Elizabeth HEANS (1717 - 1777) in 1740 in Trunch. There is no record of John being born in Trunch and the most likely I have found is John born in Horsham St. Faiths north of Norwich in 1716 with father Thomas and mother Elizabeth. Heans likewise is not a Trunch name and is very unusual in Norfolk even with alternative spellings. It is however found in Devon and an Elizabeth Heans was born in Hartland, Devon in 1720 with father James, a yeoman (small farmer) and mother Elizabeth. In view of the Devon links detailed below, this is possible.  However it is more likely that she was Elizabeth HAYNES born in Skeyton in 1717 to father William and mother Tamasin, especially as she named one of her daughters Tamasina. 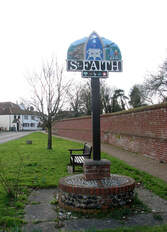 John and Elizabeth had 9 children in Horsham St Faiths, where John was a wealthy farmer. At the time of John's death they were living in Trunch and in his will he leaves everything to Elizabeth. Elizabeth's will of 1777 states that she was a widow from Trunch and was living with her son Samuel in Knapton at the time of her death. She instructed that all of her real estate should be sold with the proceeds distributed between her children and a few other relatives. Some of the children had obviously been given large sums of money while she was alive. She took particular pains to see that her sons Benjamin and James were well catered for as they were under the age of 21 when she died. Sums up to £1000 are mentioned, so obviously a wealthy family. 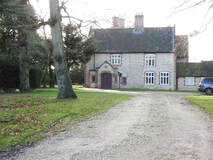 Knapton Old Hall
Their son Robert BUSHELL (1755-1829) was an important farmer and wealthy resident of Trunch.  He married Mary WORTS in Lessingham in 1774 and they had many children in Trunch with at least 6 dying in infancy. He is mentioned in indentures relating to land in Knapton from 1786 to 1801.

Son Samuel BUSHELL (1749-? )  married Susannah NEALL in Trunch in 1767 and they had two boys who both died in infancy before Susannah died in 1774, by which time they were living in Knapton.  In 1777 Samuel married again to Phillis POSTLE from Trunch and they moved to Coldridge in Devon where they had 6 children.
Why they moved to Devon is still a mystery.
John and Elizabeth also had a daughter, Elizabeth and she married Zachariah STEWARD in 1771 in Trunch and that explains the STEWARD links.
Please contact me if you have any more information about this family.