Clarke families have lived in Trunch from at least the 16th. Century until today. Sometimes the name is spelt without an e and sometimes without and there have also been Clarksons - the son of Clarke. Three families are of particular interest. John Clarke married to Mary seems to have had a family of girls in Trunch in the late 17th. Century of whom few survived.  John and Mary both left wills which will give more information. 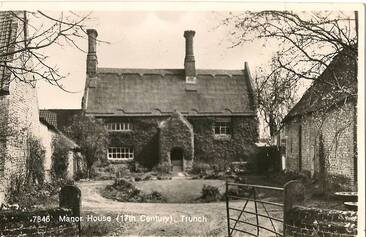 Matthew Clarke (1804 - 1872) was the farmer at Hall Farm (the old Manor Farm) for many years. He was born in Marsham, near Aylsham, in 1804. His mother was Lydia Clark, but no father is named in the parish record. There may be an earlier link to Trunch as a century earlier a Lydia from Trunch married Robert Clark and the slightly unusual name Lydia may have been passed down. Matthew married Sarah Allen in 1830 in Worstead, where they were were both living.  Sarah was born in Tuttington and that was where Matthew was buried in 1872.

Their first born son, James Allen, was born in Worstead and he went on to be a miller in Lammas. Six other children were born after they moved to Trunch. Peter William also trained as a miller but moved to London and worked as a clerk and engineer; he never married. George became a joiner and builder's foreman, married Gertrude and brought up a family in North Walsham. Daughter Sarah Ann married Robert Buck in Trunch and after Matthew died his widow ran the farm with the help of her son-in law, who took over the tenancy after she died.

Kirriemuir, Angus, Scotland
Another farmer called Clark was Alexander but he came from Scotland in the 20th. Century, as did a number of other farmers in Norfolk. Alexander was born in 1897 in Kirriemuir Angus, which was the home town of J.M. Barrie, who wrote Peter Pan. He married Nancy Young Harrison in 1931 in Glasgow and I think they had a son there in 1931 but I can find no later records of him or any other children. 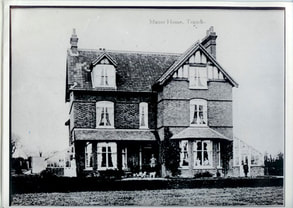 Manor House Farm, Trunch
Alexander and Nancy were living in the new Manor Farm by at least 1936 and in the 1939 register he states that he is an arable and dairy farmer and an ARP warden. Their address does have an undisclosed entry which could possibly have been a child. In 1960 they were passengers on the Oriana as she made her maiden voyage from Southampton to Australia and they were still at Manor House Farm in 1968.

Other Clarke families in Trunch have included that of Robert and Annie, who with their twin sons were living in the New Inn in 1939. Robert was a shop asssistant (fish and fruit) from Mundesley and sadly the grave of one of their sons who died aged only 5 is to be found in Trunch Cemetery.
If you have any more information about Clarkes in Trunch please contact me.