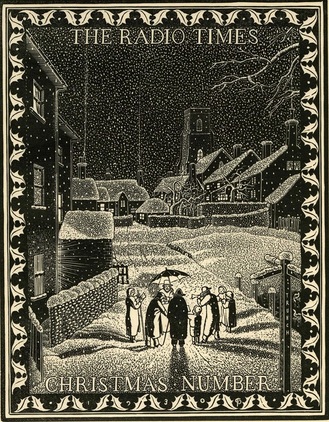 Trunch carol singers
This image of Trunch was featured in the Eastern Daily Press in 2016. It said that it is a 1930 wood engraving, entitled "Carol Singers" by Claughton Pellew (1890-1966). He moved to Overstrand in 1919 and then had a house built in Southrepps in 1926. He depicted Trunch in several of his works.

This print was commissioned by the Radio Times for their December 19th. edition in 1930. It is now owned by Anne Tennent, the artist's niece, who lent it to the Castle Museum for an exhibition in 2016.

The carol singers are standing on the Hill outside the Ingle, with the old pond on the right, and the old Crown and the church in the distance. One interesting aspect of the snowy scene is the use of light by the artist, in the house windows and then shining brightly on the singers. 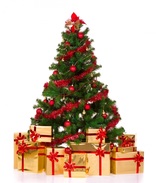 Christmas is mentioned a few times in my records. At the school in 1880 the holiday didn't begin until Christmas Eve, and in other years it was nearly as late. In 1894 Miss Johnson, a relation of the wealthy Primroses,  gave each child an orange on the last day of term before Christmas. Christmas songs were taught and in 1909 there were special lessons on the Christmas Tree. Also in the early 1900s Arthur Amis remembers earning a few extra pence by selling holly that he had collected around the village for decorations. 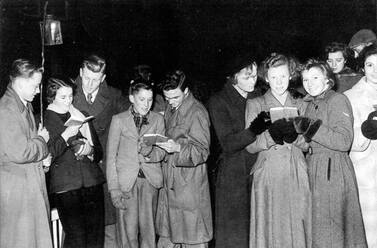 Some singers believed to be from Trunch - maybe Jean and Margaret Flaxman, Rodney Hicks and possibly David Temple

More recently, the Women's Institute had a competition for a Christmas table decoration in 1978, the Crib Service on Christmas Eve became very popular, and residents of Primrose Close had special Christmas lights displays.

Currently there are many Christmas celebrations in the village. The crib service continues to be packed out, and in 2016 there were 3 Christmas themed sales and several Christmas gatherings.  And in a nice link to the Pellew image above we now have carol singing outside the shop, a week or so before Christmas, and a few years ago we were singing in the snow. In 2020 during the Covid 19 pandemic the normal activities could not take place but there was carol singing outside the church.

If you have any memories of Christmas in Trunch that you would be willing to share please contact me.