Compiled by Mrs. A Fotheringhame, Mrs. F. Robbins, Mrs. F. Mickelburgh and Miss V. Beaumont
This is a list of the main items
Village organisations in 1978
Women’s Institute Programme
Undated items - modernisation of Village Hall, sale of Trunch House, funerals.
January - start of a series of articles by Arthur Amis about the history of chapels in
Trunch
February - letter about Cissie Spurgeon, daughter of John Spurgeon, butcher
April - Story of a Village - history pageant
May - weekend of music in church
July - Village Week
September - Rev. Westney leaving
October - funeral of Harry Fuller
November - funeral of Thomas Fuller
December - village cut off by snow drifts
Below is a selection of items from the scrapbook.
I have picked out items related to Trunch history
Click here for a fuller version. Trunch 1978 scrapbook. 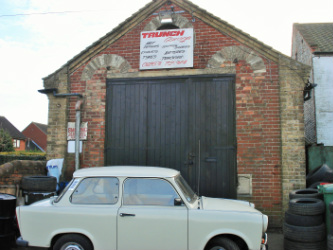 Trunch had 2 chapels prior to 1937 and these were both in Chapel Road. The Primitive Methodist
is now Trunch Garage (until 2014). The Wesleyan Methodist, now pulled down, was situated
opposite Gorrell Hill Farm. In 1928 it was decided to join together and call ourselves
Methodists. This marriage of the two societies had problems; one of which was “Which chapel do
we use?” After much discussion it was agreed to use the Old Primitive for the Sunday School and
the Wesleyan for Sunday Services. The Reverend Thomas Featherstone came to the North
Walsham circuit in August 1934 as superintendent minister. Having found Trunch Methodists
already joining together in worship, he suggested that the trustees of both chapels amalgamate to
make things more simple to manage.

The Rev. Featherstone was keen to try to build a new chapel and dispose of the two buildings.
On July 8th. 1936 the trustees met to discuss the position and it was at this meeting that the
trustees agreed to purchase a site and build a new chapel and schoolroom. This led to further
inquiries to be made re: a site. An offer of a site on the North Walsham road of onethird of an
acre for £30 was considered the best and so on July 29th 1936 the trustees unanimously agreed to
go ahead with no money in the trust fund but a determination to build. An architect was engaged
and plans drawn up and after a great deal of thought by the trustees and The General Chapel
committee in Manchester, permission to build was given. It was then that the real work started to
raise the money - all the members were keen to help with various means of raising the money -
sales, fetes, concerts, etc. In May 1937 a start was made on the building and on Dec. 1st. 1937
the chapel was opened ready for worship - not quite free of debt but the final payment was made
in April 1938.
FEBRUARY
Letter to the Rev Michael Westney in Trunch Rectory from John. S. Ellis
Dear Mr. Westney,
On the 28th. February, when you conducted the funeral service in Trunch Church for my cousin Cissie Spurgeon, you spoke of the many changes that have taken place in the village during the
82 years of her life. You recalled the long association of certain families with Trunch and your
remarks have prompted me to recall the family butcher’s shop and slaughter house started by her
father John Spurgeon around 100 years ago. As a boy I spent happy holidays in Trunch and
remember my uncle and cousin Ralph killing bullocks, sheep etc by the old poleaxe method and
the modern humane killer: my word how the pigs would squeal. Then I would enjoy riding in
their pony cart distributing meat to many surrounding villages as well as to local families.

My dear mother was born in Trunch in 1879 - almost a century ago - and was the youngest
daughter in the large family brought up in the village by Josiah and Harriett Fuller who were born
I believe at Trunch. After marrying my father in Trunch church in 1904, my parents lived in
Southwark, London, where my father had a Cornchandlers business. My mother often spoke of
her happy childhood days, when she sang in the choir, played the organ and had many friends
with other old Trunch families such as the Spurgeons, May, Flaxman, Rev Kimm and others.

AndAPRIL
April 8th. “Trunch – the story of a village” Parish Church 8 p.m.
A story in twelve scenes showing life in the village from A.D. 1400 to the present day, told in
mime, music and the spoken word. Played by the people of Trunch and aided by song from the
Millwood Singers.
PHOTOS above - do you know any of the people in them? If so please contact me
Bev Leeder has kindly identified the angelic-looking boys in the right hand picture as Matthew Houchin, Alan Yaxley, Paul Temple, Simon Temple, Stephen Reynolds and Peter Temple and  Anne Eccleshall identifies the drinker with a woolly hat in the Crown scene as her father Michael Westney (the Rector) with his brother Nicholas next to him and she thinks that it is Arthur Amis holding the cabbage in the market scene.
Extracts from newspaper reports
Over 250 people crowded into Trunch Church on Saturday when a cast of 540 put on a pageant
entitled “The story of a village” The story began in the year 674 with St. Botoph, the patron saint.
It went on to the 14th. Century with the cast acting and miming “The Saturday Mart” and other
scenes included “The Old Crown Inn” which was burnt down in 1941. “The instillation of  John
Gogyle’s  rood screen” which took place in the 16th. Century and “The Despoilment”
Among the cast were the rural dean Rev. Garth Norman, the Rev. Michael Westney and Mr.
John Grover, area social services officer. Mr. Charles Cornish was the narrator. Mr. Arthur Amis
gave a humorous account of village life from 1912. 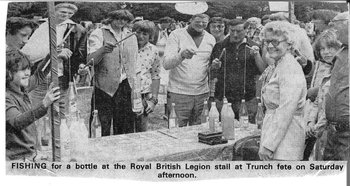 Excerpts from a Report in The Mardle
All our fears about the weather disappeared on the first day and the Flower Show and Fete took
place without a drop of rain falling. A very good display in the show tent, plenty of varied side
shows and Malcolm Larke’s growing display of tractors , provided something for all.
A very happy and successful day rounded off with the Sports Evening when Trunch regained the
Shield from the Caravan Club.
A crowd of adults and children collected around the Village sign on Tuesday evening for the
sponsored walk on the footpaths. Arthur Amis led us on our way, stopping now and again to tell
us when we were in foreign lands like Southrepps.
Gorrell Hill Farm was open on Wednesday when the ladies from the Chapel mounted a fete and
tea and the bowling green was available. The Village Hall was again full in the evening for the
concert of the St. Andrews Singers. Friday started off wet but soon cleared. More people than ever joined in Peter’s car rally and the same applied to the barbecue.
Molly ran the bar in the garage. The final stragglers were ejected after 11 p.m.
And so to Saturday - our first Minimarket together with the mile of pennies - proved well worth
doing  The dance rounded off the day.
OCTOBER
Mr. Harry Fuller of 11 Chapel Road died suddenly at the age of 71.  He started his working life
as a butcher at Spurgeons. When they closed down he joined the Post Office.  He got up at 4.30
each morning to cycle to Mundesley in time for the first delivery. He served in the Home Guard
during the war and was a keen gardener and bird watcher, belonging to the RSPB.

NOVEMBER
The funeral service of Mr. Thomas Fuller took place in the Parish Church. Mr. Fuller was born in
Trunch 72 years ago and from an early age worked for the late Mr. A. May at White House Farm.
Then for several years he worked at the old North Norfolk Brewery, Trunch - now not existing.
He served in the Royal Artillery for the duration of the war, then worked in London for  22 years,
returning to his old home at 3 Chapel Road, on his retirement 7 years ago.
DECEMBER
December 31st.
Blizzard and heavy snowfall hits North Norfolk. The village of Trunch completely cut off from
surrounding villages by deep drifts of snow. Mr. John Freston was unable to get to Parish Church
to take 11.15 service. His car was stuck in a drift a few miles away. A retired clergyman now
living in Pyghtle Close was called upon and he quickly arrived to conduct the service.