The family of Thomas RIVETT (1842 - 1909) appear in the 1881 census in Trunch and thereafter. He had married Harriett Boulter from Trunch in 1868 and although their eldest son was born in 1869 in Trunch I cannot find any of the family in the 1871 census.  Thomas was born in Briston in North Norfolk to John (1810 - 1868) and Judith Patten. (Judith called herself Julia at times and once as Elizabeth). John's parents were Thomas and Elizabeth Ives from Trunch and he was born in Swafield - so plenty of local links before Thomas moved to Trunch. 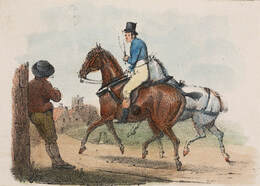 TRAGIC DEATHS Unfortunately both Thomas' father and son, both called John, met tragic ends. His father was killed when he was riding a pony and leading a horse owned by Mr. Primrose, when a rider coming very quickly in the opposite direction rode between the horse and pony and John was pulled from the pony and never recovered from his injuries. The inquest jury announced it to be accidental death, but I think that today the verdict would be somewhat different. 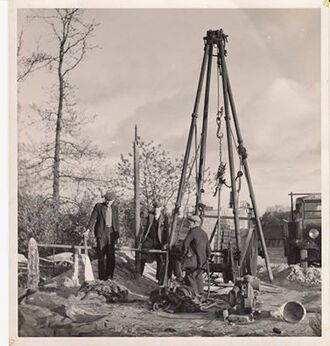 Bullens - well-sinkers of Trunch
Thomas' son John  (1869-1899) was killed, along with William Bane, when they were sinking a well in Northrepps and it collapsed onto them. The Eastern Daily Press of May 16th. recorded the sad aftermath. " The final scene in connection with the Northrepps disaster was witnessed yesterday. In the afternoon the remains of the deceased men were removed to Trunch for internment. This took place at 5 o'clock in the presence of a large crowd of mourners and sympathises. Along the line of route blinds were drawn and shop shutters put up in token of respect. The coffins were made by the late comrades of the deceased, Mr Bullen, Mr. Pardon and Mr. Amies. Rev. Kimm conducted the service. The church was full and the hymn Rock of Ages was sung. The coffins were borne to the grave by parishoners. The grave, a double size one is situated to the north side of the church and as the bodies rest side by side they are close to where relatives of both deceased men are buried." The Thetford and Watton Times on May 20th. said that "Thomas Rivett identified the body of his son John. He lived at home with his father and worked for Mr. Bullen, well sinker. Alfred Bullen said that John had worked for him for several years and had done a lot of well-sinking."

AN AMUSING SCHOOL TALE The school log book of the late 1800s records several of Thomas' children attending or not attending school! And on March 23rd. 1896 the school mistress, Miss Sharrod, wrote in the log book "Mistress gave all standards an object lesson on the frog. William Rivett brought a live one. The children took a great interest in the lesson."
MILITARY SERVICE  Thomas' twin sons - Frank and Robert (Bob) both enlisted for World War One in 1915. Frank served until 1917 when he was discharged as no longer fit for active service after spending some time in hospital with rheumatism aggravated by his service. His brother Robert was sent to France, where the condition of the trenches was so bad that he got trench foot and was sent home for the rest of the war. Thomas' daughter Anna Elizabeth had a son, Robert Gee, before she married Stephen Bright and Robert Gee was in the Royal Navy from 1916-1919. His name is next to Alfred Mason, another Trunch man, in the records, so it is likely that they joined up together. Robert Gee was married with a family and still living in Trunch in 1939 and his son Leonard died in Trunch in 2009.
If you have any questions or more information please contact me