The manorial records give some insight into what life was like in Trunch after the Norman Conquest in 1066. Trunch was one village in the Gimingham Soke (an administrative group of villages) which was given to William de Warenne by William the Conqueror. Trunch was always the market centre of the Soke and the definition of Trunchet as a weighing place in Danish would fit in with this. The Lords of the Manor collected the King's taxes, dispensed justice and protected villages in exchange for taxes and work. However even in the early days skilled workers such as blacksmiths were paid wages. Click here for a list of the Lords of the Manor of Gimingham/Trunch. Goodrich (1939) says that Trunch had two sub-manors which were Colman's and Rectory. Thomas Brownynge was the Lord of Colman's Manor before 1546 and was followed as Lord by members of the Worts family. The Gimingham Manor also had property in Trunch, particularly on the Hill and near the Church and these were held as Copyhold by their owners. When the properties changed hands the seller and buyer had to go to a Manor Court and get permission for the changeover "by passing the rod". The deeds of The Shambles on the Hill show that this went on until 1902.
EARLY TRUNCH RESIDENTS

Some of the earliest records of the Manorial Court give some indication of misdemeanours and of the names of early Trunch residents. In 1268 a Roger Suneman was found drowned in a well, but it was deemed to have been an accident. Also in 1268 a thief called Walter Helisent took sanctuary in the church. However he "was in the tithing" of Alexander de Fonte who was fined. A list of people who paid taxes in 1327 gives some names with odd spellings but similarities to modern names. Christian names such as Clem, Nicho, Rob'to, Joh'ne, Adam, Clem'te, Willo, Thom and Rogin and surnames were W'st, Danne, Hulot, Allen, Pynnyne, Smithe, as well as those named after their birth places such as de Paston.
THE LABOURER'S LOT

In 1349 the Black Death swept through Norfolk and many bondsmen died so the lot of the labourers improved for a time, as they were in short supply, and could claim higher wages. However wages were then fixed at the low 1346 level and labourers were forbidden to go elsewhere to improve their lot. There was an example of this in Trunch when Thomas ate Welle deserted service from his master William Okey in 1369. Eventually he came before the King's Court and was sent to Marshalsea Prison, south of the Thames. 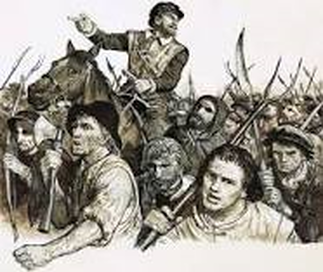 After the last Earl Warenne died the Manor passed to Henry Duke of Lankaster and then to John of Gaunt who was very unpopular. His Manor House was a point of attack and the men of the Soke were at the head of the insurrection known as the Peasants' Revolt. The uprising was against the poll tax and the manorial administration and Court Rolls were destroyed and Manor Houses attacked. John of Trunch was one of 3 men chosen to take a petition to the King but they were arrested by Henry de Spenser while on their way to London and were executed in Wymondham.

Some of the records give clues about farming in Medieval Trunch. Crops of barley, smalcorn, oats and peas are mentioned as are cattle, sheep and pigs as well as woodland, meadow, heathland and marsh. Several of the disputes that were brought to the Manor Court concerned land issues; disagreements amongst family members about ownership, putting up unauthorised fences and gates, allowing cattle to destroy woods and to trespass into neighbour's crops, or pigs to be untethered on the Common.  In 1499 "John Hereward kept a fold of 100 sheep, where no-one ought to keep them".
TRUNCH'S WINDMILL

Trunch used to have a post windmill for grinding corn and it is mentioned in the Manorial records. In 1391 it had to be repaired after a storm. William Stub was paid 5 shillings for 12 days work making a new axle and John atte Chirche was paid 2 shillings and 8 pence for 8 days of the same work, while Geoffrey Thurghard was paid 10d for 2 days work. William Stub was also paid 5 shillings for 12 days of making "lesalmes" of the wheel, corbels for the "melari", making 2 new rods and "thrirghschotes" and placing them. Again John atte Chirche assisted and was paid 4s 4d for 13 days work.

Supplies were also bought - 8 clothsplantes cost 8d, as did one goug of sticks and William Stub was paid 5d for one day making and placing them. Two inner and outer caps of iron cost 6s 10d and one "spyndel" and one iron "rynde" cost 4s, while the nails cost 13d.
Clement Kyng was paid 12d for making the wall of the Mill House and various tenants who helped with placing the axle were paid 6d between them.

Unfortunately the windmill came to grief again in 1414 when it was blown down in a great storm.
MANORIAL JURY SYSTEM

Men who had lived in Trunch for over a year and a day were obliged to sit on the Manorial jury. A list of membership of some of the juries can be found by clicking here - Trunch Manorial jurymen. As well as dealing with land issues, as mentioned above, people were brought before the juries for not repairing paths or not keeping streams clean. In 1493 Thomas Gryme "stopped up a certain common way out of the street called Fenbewestrete leading to the church with one new stile made".  In 1499 John Hereward erected a gate in Stokes Lane "where none was before".

Other issues before the juries were arrears of taxes, for example Clement Woortes in 1530 and something very familiar today when in 1632 William Morson was summoned for having "woods overhanging the highway in Stannards Lane - between Gimingham and North Walsham".  There were also some more serious crimes. In 1640 the Trunch jury found on information from Edward Claydon that Nicholas Helesden of Trunch did "violently beat and draw forth the blood of the said Edward at the house of Lawrence Bugdane upon Fryday fortnight last past".
A good source of more information about Trunch Manorial records is "The History of an East Anglian Soke" Christobel Hoare 1918. If you search for the book title +Toronto University you can read and search the whole book online.