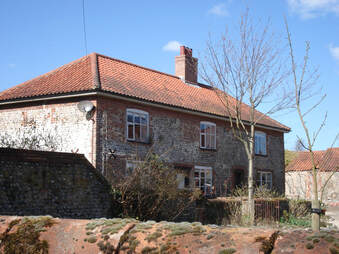 Miller's Farm, Trunch
Many people living in Trunch can still remember the Larke family who lived and worked at Miller's Farm in the 20th. Century. Up until the 1990s they kept dairy cows and delivered  milk in the village.

I believe that Victor Larke (1889-1959) took over the farm in the 1930s and his son Cyril carried it on. They come from a long line of Larkes who have lived in Trunch and surrounding villages for many generations. Victor's father was John Burrell Larke (1866-1911), a gardener born in Swafield but living in Trunch by 1901. John's father was William Burrell Larke (1821-1883), a mole-catcher born in Blofield but living in Swafield after his marriage to Abigail from Knapton. William's father was Benjamin from Gimingham, also a mole-catcher in Blofield and the Burrell part of the name appeared when he married Rachel Burrell in 1811.  Benjamin was born in 1786 to William and Sarah nee Slap. 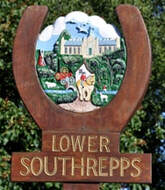 Another Lark family in Trunch was that of John (1794 - 1889), an agricultural labourer, who was born in either Gimingham or Southrepps (sources vary). He married Elizabeth Buttle in 1813 and had 4 children with her in Trunch, and then 6 or 7 with his second wife Hannah and one with his third wife Mary Newland, all in Trunch. Of all these children only two or three were boys, and two of them seem to have made their lives in Southrepps, with Samuel being a master shoe-maker and Benjamin an agricultural labourer. John himself lived to the grand age of 96.
The final family of Larks was that of Robert (1817-1890), who was born in Mundesley but lived in Trunch from 1840 until his death in 1890. He may also have been a son of John above, as his mother was Hannah, and it is possible that John was working in Mundesley when he was born. Robert married Charlotte Clarke from Knapton in 1839 and they had a son Samuel in Knapton, who moved to Yorkshire to work as a coachman. After moving to Trunch, where Robert worked as an agricultural labourer, they had 8 more children, one of whom, Joseph became a blacksmith in Trunch, Swafield and Paston. Another son, Matthew was a gardener and he moved to Northumberland. 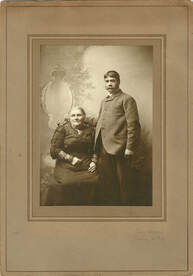 Please contact me if you have any questions or more information about the Larkes in Trunch.