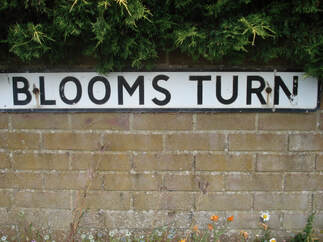 The BLOOM family did not live in Trunch as long as some of the other families but they left a lasting legacy in the name of one of our roads. The first appearance of a BLOOM in the parish records was in 1813 which was followed by several large families but by the time of the 1901 census there were no BLOOMS left living in Trunch.
Robert BLOOM (1777-1850) who appears in the 1841 census with a large family of children all born in Trunch seems likely to have been born in Thorpe Market and perhaps moved here for work as an agricultural labourer. In 1835 he received an award for 24 years service as a teamman for farmer Thomas Bidwell. One of his sons, James, born in 1820, moved to Edingthorpe and had the interesting job of horse-breaker.
Anthony BLOOM (1813-1897) was born in Southrepps and from his two marriages he had at least 18 children, all born away from Trunch apart from two of the girls. He was a bit of a traveller, living in Essex and Suffolk, as well as Norfolk and this may have been an example to his children who travelled far and wide. Walter moved to North Walsham and then East Dereham and Swaffham; George moved to Knapton; James and Herbert both worked in coal mines in the North East of England; Frederick ended up as a railway clerk in Norwich; while Robert, Edward, Alfred and Henry all moved to nearby villages.
Another family was led by Francis William BLOOM (1826-1877) He was also born in Southrepps to Francis and Sarah Ann. (Confusingly another Francis was born at almost the same time to Robert above and several researchers have them muddled - but "Francis" as father on the marriage certificate confirms my view) This Francis worked in Trunch Brewery and married Louisa Holler from Catfield who was a shoe-binder. Of their 6 boys, Henry was a groom, George a travelling boot salesman, Hollis a coachman in London and then Cheshire and Walter a groom and then a taxi driver in London. In 1881 Frederick  was working as a servant for The Reverend Jarrett (the Trunch Rector) in his college rooms at Cambridge and he carried on with that work in Essex and Suffolk. Francis also worked in service in Norfolk and Sussex, and in 1911 was a butler in the home of a cotton manufacturer in Preston. Interestingly none of them ended up as agricultural workers which was the norm at the time. 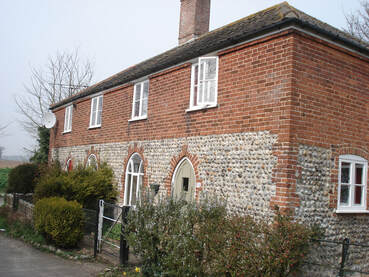 Farm worker's cottages in Bloom's Turn, Trunch
However, I think the family that gave their name to Bloom's Turn was that of Daniel Acherson (1808 - 1875) He was born in Southrepps to Robert and Elizabeth (nee Wilkins) and lived in Trunch from before 1851 until his death. He worked as an agricultural labourer, having moved from Sidestrand where his son William was born in 1842 and  interestingly William joined the Merchant Navy. They lived in one of these small cottages on the Bradfield Road, where Worts Lane was renamed Bloom's Turn. 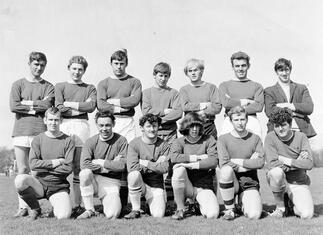 Although not appearing in the Trunch census's of 1901 or 1911 some Blooms do feature in later Trunch records. David Bloom is second from the left in the back row of this football team photograph.

If you have any more information about the BLOOMS please contact me.