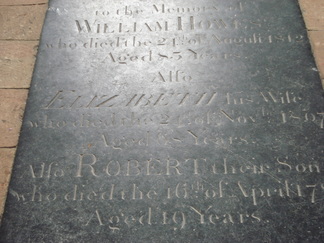 Howes memorial
The Howes (or Howse or House) family have a very long history in Trunch. In the 15th. Century Richard, John and Thomas were mentioned in Manor records and in the 16th. Century John Howes and his wife Margaret had several children, whose baptisms are recorded in the parish records. This century also saw the first two incidents of Howes family members marrying into other notable Trunch families when John Howse married Margaret Prymerose (Primrose) and Thomas Howse married Dorothie Worts. The 17th. Century saw further Trunch marriages and births, perhaps the most interesting being when Euphemy Howse married John Harelyp in 1683. Harelips were seen quite often in the past before modern surgical techniques could correct them. The will of Thomas in 1646 shows that he was a wealthy farmer with a "new house" possible Trunch Hall on the Bradfield Road.

In the early 1700s another John Howes and his wife Elizabeth lived in the village. He may have had an earlier wife, Ann Bane, who died in the first year of marriage. John died in 1750 and his son William inherited. William was a farmer and he married first an Ann and then Elizabeth Riddel. He died in 1812 and his will shows that his daughter Mary also married a Worts. There is a memorial to him, his wife and son in Trunch church.

Meanwhile William's younger brother Robert, married Deborah Wortley and lived in the village until he died in 1815 aged 81. His will is available to view, as is that of William's son also called William who died in 1816. WILLS
As the 19th. century progressed there was less mention of Howes in Trunch and although there was an Elizabeth Howes in the workhouse it seems unlikely that this was the same family. The lane and fields named Howes on the Tithe Map of 1839 suggest that they were farmers and the wills record some wealth. None of the census records have any Howes people born in Trunch but Harriett Gibbons from Trunch did marry a Thomas Howes about 1870 but by 1881 she was a widow living in Norwich. When she died in 1929 she was said to be the widow of Thomas Howes, a farmer and the informant was her son T. Howes from Great Yarmouth.
Click here for my more detailed notes Howes of Trunch