What's in a name? Well in the case of this family, quite a lot. Throughout the census returns of the 19th. Century they call themselves BURTON or PYE or BURTON-PYE. This probably arose when someone named PYE married somone named BURTON but so far I have been unable to find that marriage. 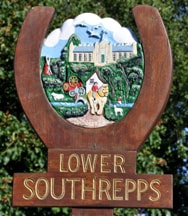 What is fairly clear is that most of the families found in Trunch originate from a family of bricklayers from the nearby village of Southrepps. Although there were some Pyes and Burtons in Trunch in earlier times the first Burton-Pye to have made the move to Trunch was Robert (1811 - 1893) who moved here with his wife and children between 1853 and 1855. Robert was a bricklayer, as was his father John and his brother Edward. In their turn all 4 of Robert's sons were bricklayers although all of them eventually moved away from Trunch.

John (1841 - 1923) married Harriet Larner in Trunch and worked here as a bricklayer until they moved to Walcott between 1868 and 1871 and thence to Norwich where he was a builder. His sons, John, Thomas and Herbert also learnt the bricklaying trade, with John eventually becoming a publican in Norwich, Thomas a wine merchant and Herbert an employer builder. 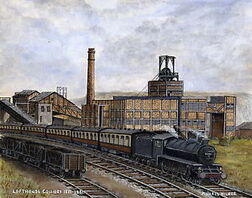 Lofthouse Colliery
Robert (1844 - ?) married Frances from Swafield and moved to Yorkshire where he was  a horse-keeper in the Lofthouse coalmine which had only recently opened and was the site of a disaster in 1973 when 7 miners died after the workings were flooded. Later he was a furnace man in Kilton's iron-stone mine.

Edward (1853 - ?) married Eliza Bishop and moved to Buxton Lamas in Norfolk where she was from, still working as a bricklayer.
Francis or Frank (1860-1934) was an interesting character. (Not to be confused with Francis born 1860 in Southrepps; this one was born in Trunch) In 1884 he served 3 months in prison for stealing money from an innkeeper in Trimingham and again in 1888 he was sentenced to 6 months for stealing cigars from the Trunch New Inn landlord. In between he was working as a bricklayer in Norwich, had married Louisa Bumphrey in North Walsham in 1886 and they had two daughters. He was still working as a bricklayer in Norwich in 1911.
Another one of the Southrepps family - Henry Burton-Pye had moved to Trunch by 1911 with his wife Alice (nee Amis -  a Trunch family). Henry was also a bricklayer and by 1939 he was living in Back Street, where his son Harry had a general goods shop.
If you have any more information about this family please contact me.