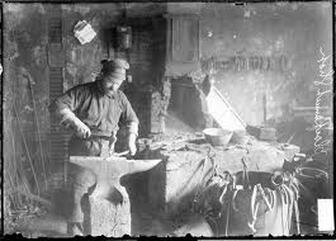 John Steward (1835-1901) was the blacksmith in Trunch for over 30 years. He married Louisa Hewitt from Westwick in 1858 and they had 5 children, including George Arthur who was also a blacksmith in North Walsham and Robert John who was an ironmonger and builder in Norwich. Two daughters worked as monitresses in the village school. John was the unfortunate companion of Mr Brockway the nursery man in 1871, who slipped under the cart that they were due to ride in, and was fatally injured.  In 1885 the family home next to the blacksmith's shop was destroyed by fire, when a spark fell on the thatched roof.

John's family tree John was born in Swafield to Robert (1805-1888) a husbandman and Emma (nee Cardigans). His brother Robert also moved to Trunch and was a carrier who married Jane Gibbons. Further back Robert's father was also a John (1781 - 1850) and he was born in Trunch where his first two children were born but by 1814 he was working as a farmer in Swafield. Going further back, John's father was another Robert from Trunch (1750- ?) and his father was Henry. 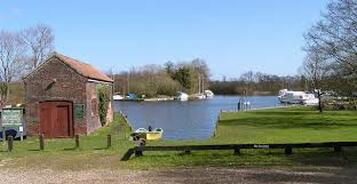 Barton Turf Staithe
Zachariah Steward This unusual name comes into the picture when Zachariah married Elizabeth Bushell in Trunch in 1771.  He came from Barton Turf and he was born sometime before his father (also Zachariah) died in 1753, although he was baptised later. He and Elizabeth lived in Barton Turf after their marriage and had at least 3 children, including a Zachariah. Then in 1786 Zachariah Steward of Chulmleigh (Devon) farmer and Samuel Bushell of Coldreg (Devon) farmer were executors for the will of Elizabeth Bushell of Knapton. This was the will of the mother in law of the Zachariah who married in Trunch but how he and his brother-in-law ended up farming in Devon is still a mystery!
Was a Trunch Steward transported? In 1787 the Ipswich Journal reported that William Steward of Trunch, mariner, was committed to Norwich Castle on suspicion of robbing the dwelling house of Ephraim Batterbee of Trunch, baker. It said that he and Thomas Neal had confessed to stealing 4 and a half guineas and 30s in halfpence. If guilty it is possible that they would have been transported to Australia on one of the first ships to make that journey but so far I have no definite proof that they were transported.
If you have any more information about the Stewards please contact me.