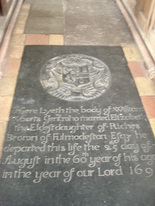 Worts memorial
There have been many people living in Trunch with the surname WORTS or the alternative spellings WOORTS/WOORTES/WORTES/WURTS. To further complicate matters some Worts later became known as WATTS. In 1998 there was a letter in the Journal of the Norfolk Family History Society saying that the Watts family in Paston had been traced back to the Worts of Trunch.

The first mention that I have found is in 1425 when a John Wortes (a monk at Bromholm in Bacton and possibly from Trunch) had a dispute with William Paston (of the famous Paston letters). Then there was a Ralph Worts  who was father to William who owned land in Trunch in 1462. William died in 1481 but had 3 sons - John, Clement and Robert who were jurors at various times and witnesses to wills. Clement died in 1535 and in his will mentions his wife Margaret and children - John, Richard, Thomas and Agnes. John moved to Bacton but Richard stayed in Trunch,and married Dorothy Blofield of Cromer and had 7 children. Thomas also married a Blofield - Joan, and in his will of 1546 he mentions 6 children and it was his daughter Cicily who was one of the first entries in the Trunch parish records when she married Thomas Brownige in 1559.

During the rest of the 16th. and 17th. Century there were several Worts families in Trunch carrying on the line above and often using family Christian names such as Dorothy, Cicily, Bertrand, and Clement as well as Thomas, Robert and William. There are three 17th. Century memorials to members of the family in Trunch Church and in 1693 William Worts left a legacy of 20 shillings a year for seven poor widows in Trunch. At least three of the Woortes boys went to Cambridge University - Richard born 1597 and William, born 1612, sons of Thomas, as well as Richard born 1623, who went on to be a Nonconformist Minister in the 1660s.

In the 18th. Century the records show members of the Worts families marrying into other influential Trunch families such as the Primroses, Bushells and Weeds. The 1806 will of John Worts shows him to be a wealthy, land and property owner.

The 19th. Century Worts who appear in the census records can all be traced to one family - that of Thomas and Mary. Their son William married Mary and had a large family, of whom most of the boys were farm labourers, although James joined the army. James' wife Rachel was lame but as a widow she worked as a dressmaker. Thomas' son Clement was a bit disreputable, only marrying his wife Ann Riches after their son James was born and appearing in the Workhouse records in 1840 for deserting his family. However they had another son in 1858, so he must have gone back to them.

Click here for my more detailed notes on the Worts family of Trunch and go to this site for a study of Worts families https://one-name.org/name_profile/Worts/

And please contact me if you have any more information about them.