TALES OF THE ROAD
Problems with roads and lanes in Trunch are mentioned in very early records. In 1499 John Hereward "erected a gate in Stokes Lane where none was before" and Thomas Prymrose "obstructed a common lane which leads from Trunch to Bromholm (Bacton) with a ditch". Early lanes such as Stokes and Davy's were named after local people, as was Stannard's Lane which in 1632 suffered a problem still felt today when William Morson was reported for having woods hanging over the highway.

In the days of horse and carts accidents on the road were quite common; in 1858 "a young man named Cushion" was killed when his wagon turned over, as was Robert Amos in 1869 and in 1871, the nursery man Mr Brockway was killed when the pony attached to the cart he was sharing with the blacksmith, suddenly started causing him to fall, sustaining fatal injuries.
Later when motor cars became common there are reports of accidents in Trunch and involving Trunch people but nothing fatal. Some residents were also fined in the 1930s and 40s for - failing to sound a horn, to stop at a Halt sign, to stop when a policeman waved a red light, and cycling without lights.
STREET NAMES
Although some of the street names in Trunch are very obvious, some are not, and some have changed their names over time.The most straightforward are those that go directly to other local settlements -  NORTH WALSHAM ROAD, GIMINGHAM ROAD, MUNDESLEY ROAD, KNAPTON ROAD and BRADFIELD ROAD  and these have kept their names over the centuries. Occasionally a Southrepps Road is mentioned in the records and this could be the road that cuts off the crossroads near Gimingham Pound although in the 1841 census it refers to the lower end of Brewery Road. 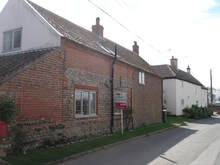 Brewery or Warren Road, Trunch
BREWERY ROAD is interesting because before the brewery was built in the early 1800s it was obviously called something else and during the 19th. Century it was only the northern part of the road (from Wrights Loke to the Social Club) that was called Brewery Road with the lower part being Warren Lane or Road. This was because it led to an area where rabbits were hunted and to Warren Farm. 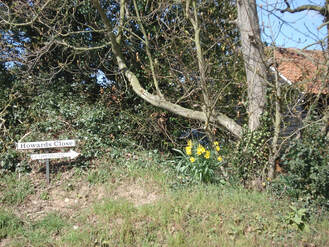 Howards Close, Trunch
HOWARDS CLOSE does not appear in any of the records until 1939. It was probably named after someone called Howard. There were earlier farm buildings there, now converted to houses and the bungalow looks as though it was probably built in the early 20th. Century.

BLOOM'S TURN was still called Mill Lane in 1839 (referencing a mill in the field south of the road centuries before), and it was Worts Lane in 1851 (after a local family)  becoming Blooms Road by 1891, after the Bloom family who lived in the cottages at the western end of the road.
WRIGHT'S LOKE was called Back Lane on the 1839 Tithe map, but was Wright's Loke or Lane in the censuses from 1841-1901, however in 1911 it was called Frarey's Lane and in 1939 it was Back Road. BRICK KILN ROAD (obviously named after the two brick kilns which were there), is not named in any of the censuses because no-one lived there but it does have residents by 1939.

A bit of a mystery is GUNTHORPE LANE next to the Rectory. In his will of 1709 Robert Thexton called it Golden Knop Lane, which is an old term for ladybird, but it was called Wortley's Lane in the early 1800s (after a local farmer) Goodrich in his 1939 book, calls it Golden Knop Lane again, but I do not know when or why it changed to Gunthorpe. If you do please contact me.
Several of the lanes around the village, which are now footpaths, have old names, often referring to past farmers. Young's Lane is next to the garage; Postle's Lane is off Brewery Road, next to Manor House; Robinson's Loke is next to Park Farm on the Knapton Road, Craunching's Loke is south of Bloom's Turn, and New Road was the concrete path off Brewery Road.
Several of the newer roads made in the later half of the 20th. Century are called Closes - referring to old fields, such as Church Close and Pightle Close, and Meadow Way Drive, while others are named after prominent local landowners - Primrose Close and Cornish Way. However I do not know the origin of the Kingsleigh Close name, although it can mean an area of woodland cleared for farming. Several roads are also named after members of the family of local builder Colin Wade - Wade's Way, Dawn Crescent, Carl Crescent, and Robert Close. Recently historical references have been used as with Blacksmith's Close, Old Forge Close and Fullers Lane. 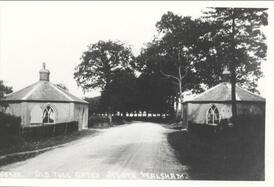 Toll houses on the Norwich to North Walsham Road
A TURNPIKE ROAD
The road to North Walsham through Swafield was quite narrow with really only room for one car until the widening in the 1980s. For Trunch travellers long ago, progress past North Walsham was via the turnpike road to Norwich. The Turnpike Trust which collected tolls and maintained the road was formed by 1797 and the Trunch vicars - Philip Gardiner and Marmaduke Ward were among the trustees.

If you have any more information please contact me.