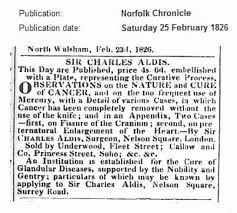 Trunch is a quiet village and not very often in the news. However old newspapers can tell us a lot about the history of the village. Some publications can be searched on line but when searching for "Trunch" you often come across a racehorse called Trunch who ran in the 1920s and 30s, as well as a Trunch Lane in Lincolnshire and sometimes even the word truncheon!

The  earliest news item that I have come across so far was in the Ipswich Journal of 1758 when a gang of gypsies were said to be living in the area of Trunch and some of them were accused of theft in Suffolk. Gypsies were again in the news in 1817 when the Times reported that one of them known as Young Gypsy or Bill Johnson, but actually named David Smith, had left a wife and child chargeable to the parish of Trunch. 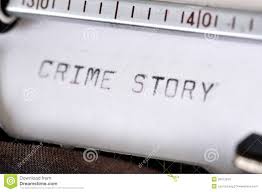 Like today crimes often made the news. Some crimes in Trunch were the stealing of a fat turkey and 3 geese in 1809, a hammer stolen from the blacksmith in 1858, poaching in 1869, stealing a jackdaw in 1870, and stealing lead from Sidestrand Church in 1868. 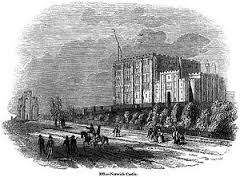 Norwich Castle in the 19th. Century
The crime reports don't always include the sentences, which may have come later, but where they do, they seem severe by modern standards. In 1828 William Self was sentenced to 6 months hard labour for stealing leather from the cordwainer. Most likely this would have been served in the dungeons of Norwich Castle, shown on the right.

The most severe punishment was for two men who stole from the Governor  of the Poor House and were sentenced to death but spared "on terms of being sent from this country for ever" - in other words transported. Another man was transported for 10 years in 1841 for stealing a great coat and a pair of trousers from the Trunch Vicar amongst other thefts and Ann Coleman was transported in 1809 for her part in a robbery.

Occasionally crimes of violence were reported. In 1848, Robert French, a tailor, was charged with beating his landlord with a sleeve board and in 1862 there was a fight outside the pub involving knives.  When the Trunch police officer was badly beaten by robbers in Swafield in 1867 it made the national press.

Some of the reports relate to loss of life, a suicide in 1783, a fall from an apple tree in 1864 and several deaths caused by overturned carts. There are also reports that show how Trunch was affected by major events such as wars, peace celebrations and natural disasters. 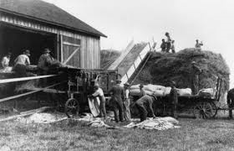 A threshing machine
Perhaps the saddest report is of William Bullen aged 14 who trapped his foot in a threshing machine in 1868 and couldn't be saved in spite of being rushed to the hospital in Norwich. 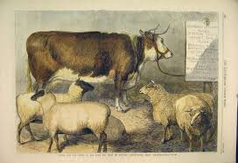 Reports about farming are fairly common; prize winning animals, complaints about tithe assessments, people being charged for feeding animals on the highway and in 1865, the cattle plague. There are also accounts of the meetings of the Erpingham Agricultural Association, when prizes and long service awards were given as well as cash sums to needy farm workers.
Notices about births, deaths and marriages sometimes give more information than can be found in parish records and advertisements can also be useful. In 1832 all of the farming stock, farm equipment, household furniture and dairy and brewing utensils belonging to Robert Beckerson were actioned and the full list gives a good picture of his life at the time. More recent reports give details of cricket, football, bowls and darts matches and teams as well as entrants to horticultural shows and those involved in church and chapel events.
Some of the news reports are especially interesting. For example in 1851 a "respectable" Trunch woman was accused of stealing a spade from a Knapton farmer and when it was discovered that the spade had in fact been left in the garden by a gardener, the farmer was met on the Hill with yells and stones from Trunch residents. While in 1929 it was reported that Isaac Temple of Trunch had a narrow escape when harrowing a field near the coast and there was a huge cliff fall. Finally in 1968 we had the yellow brick saga, which is mentioned on the brickmaking page.

Click here for details of all of the Trunch news reports that I have found so far. 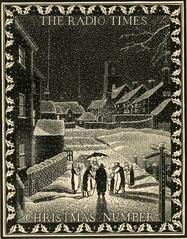 ​This image of a print (wood engraving on paper) of Carol Singers in Trunch by Claughton Pellew was used as an illustration for the Radio Times 19th. Dec. 1930.