This is a listed, 18th. Century house with black pantiles and sash windows, which was owned by the Primrose family from at least 1839.  From 1861 until 1882 it was the home of William Primrose (born 1796) the major village landowner and employer. He was followed by his son Henry and then by Timothy Blanchflower in 1901 and Arthur May in 1911 up to 1974. 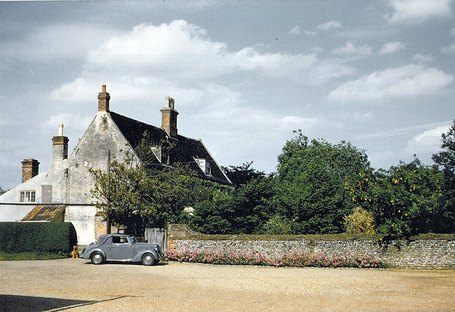 
The picture on the left shows the White House in 1953, with Arthur May's car in the foreground

This is a late Georgian, listed house with two Tuscan style porches. The village trail leaflet suggests that some of the patterned work of brick and knapped flint is older and may be a fragment of the lost Guild House. (In 1400 the Guild House was leased by Robert Hay at 6s 8d per year)

In 1826 the house was owned by Robert Long and it was sold in that year after he died. Click here for the auction notice. The 1839 Tithe Map shows Sir Jacob Preston as the owner and William Long as the tenant. In 1841 William Long aged 70 was a farmer in the Mundesley Road and in 1851 James Riches a maltster was living at Long's Farm on the Mundesley Road.

A Seventeenth Century complex of farmhouse and barns named after John Miller who lived there from 1835-62, and his son who followed on in 1865. The owner of the farm in 1839 was Ann Dixon. (She was the daughter of Joseph Roberts who I believe owned the farm in earlier times). In 1881 Robert Thirtle possibly lived there, Henry May did in 1891 but it is not clear in the 1901 census who lived there then. Fred Buck was there in 1911 but he is listed as a worker not a farmer. Later in the 20th. Century the Larke family farmed and lived there and in the 1980s they delivered milk in the village. 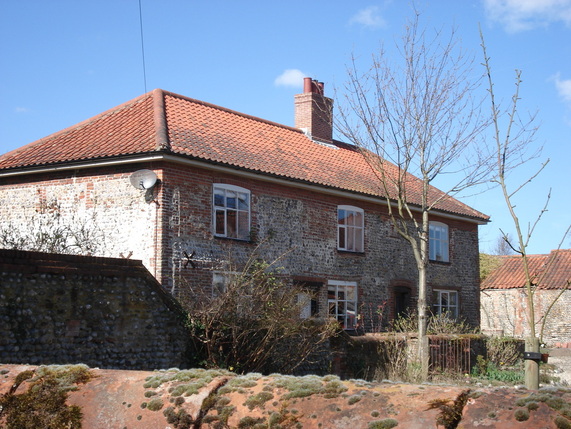 This is thought to be a late 16th. Century or early 17th. Century Manor House. It is thatched with octagonal chimneys and original brick mullioned windows. It is a little confusing as there is now another Manor Farm and another Manor House in Trunch. So this is now referred to as Hall Farm. In 1839 the farm belonged to Jonas Walpole and he leased it to farmer Matthew Clarke who lived and farmed here until 1871 and after his death his widow ran the farm. Robert Buck then married Matthew's daughter Sarah and was the farmer from 1891 until 1922 and from 1905 until at least 1915 the freehold of the farm was owned by Ezra Cornish. Walter Gibbons was the farmer in 1929 and Malcolm Larke lived there in 1977. The farm was sold in 2015. 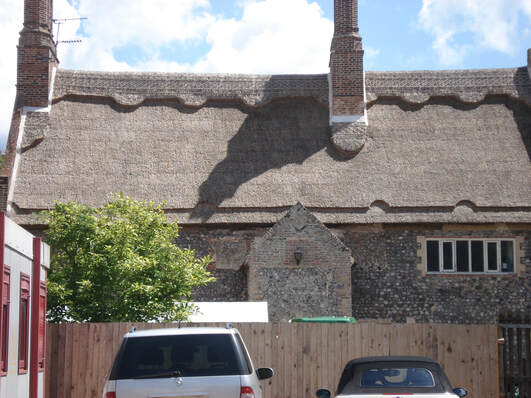 
All change in 2019. A new thatched roof and renovations underway.

This is a 17th. Century listed farmhouse. In 1839 the Tithe map shows that the farm was owned by John Amis and worked by John Hust. The census shows clearly that the farmer who lived here from 1881 to 1911 was George Ducker but the earlier years are uncertain - possibly Richard Hust in 1841 and 51, and Charles Greenacre in 1861. In 1919 George Hicks bought the farm from the Buxton Estate. He paid £30 an acre for the 96 acre farm.
PARK FARM Knapton Road

A late 16th. Century, listed house with possible earlier parts, said by Goodrich in 1939 to be thatched. He also says that Marmaduke Ward (the Parish Clerk) lived here before selling it to Thomas Bidwell who lived here in 1851 followed by his son Thomas from at least 1861 until after 1891. The Tithe map of 1839 however shows Thomas Bidwell as the owner-occupier but he is not on the 1841 census. Ellen Forrest was here in the 1901 census but she was "living by her own means" so not farming. She was still living here with her daughters in 1908. Charles Briggs was living here in 1911 and 1912, Captain Mcloed in 1922 and Claude Plummer-Jones in 1928/9. The Plummer-Jones' had moved from Remuera in New Zealand. During World War Two the Hall was occupied by Lt. Col. Alexander van Stranbenzee and in the 1960s I think the farm was owned by Bob Gibbons. 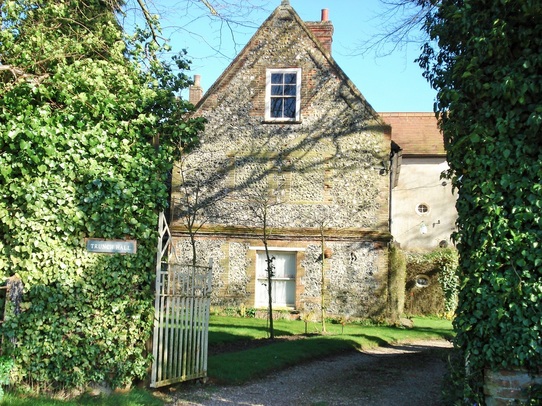 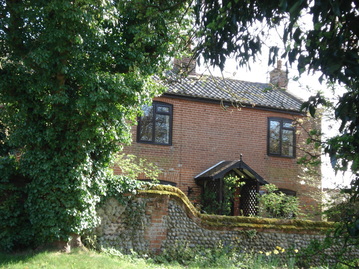 Grove/Warren Farm 2014
GROVE or WARREN FARM is on the South West edge of the parish at the end of Brewery (Warren) Road. In 1839 it was owned by Thomas Greg and it had a variety of tenants in the 19th Century. John Whitwood in 1841, William Burred in 1851, John Jordan in 1861, Edward Youngman in 1871 and William Cooper in 1891.  Walter Paul was the farmer from 1901 until at least 1929 - calling it Jubilee Farm.
TEE FARM On edge of Trunch near Mundesley

Robert Margetson lived and farmed here in 1841 and Cornelius Bugden in 1851 & 1861; then Rhoda Bugden, who was Cornelius' widow, took over. James Thompson seems to have had a few acres in this area and in 1901 and 1911 Robert Puncher was living here but his occupation was "carter" rather than farmer. However in his book Arthur Amis does say that he had dairy cows and farmed the land with his sons. In 1922 and 1929 Charles Mileham was the farmer at the Tees.

MANOR FARM Brewery Road
The farm buildings and cottages that were on this site in 1839 were owned by William Primrose. This farm house appears in the 1901 and 1911 census returns with Frederick Powell living there. The farm house is now called Manor House. In his book Arthur Amis says that William Golding rented this farm until 1921 when the Buxton Estate sold it to Robert Fox who farmed here until about 1930. Alexander Clark was the farmer in 1939 and he and his wife Nancy Young Clark were passengers on the Oriana that sailed from Southampton to Australia in 1960 and they were still living at Manor Farm.
OTHER FARMS

Other Trunch farms and farmers are mentioned in the censuses. For example Robert Wortley had 112 acres in 1841 and 1851 and he lived in Chapel Road. The Laurels in Chapel Road also had farmers living there. See Laurels In addition several small farmers with a few acres are often mentioned as living on the Hill in the centre of the village. Today Dairy Farm can still be seen there and in the early 20th. Century John Riches and his wife Anna lived there and sold milk and butter from the cows that they kept on a few acres. 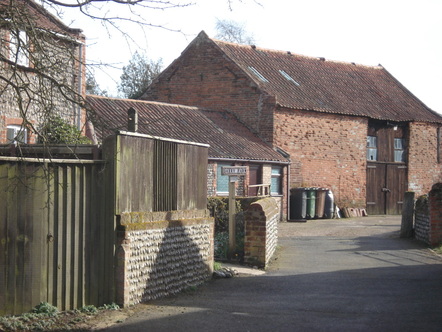 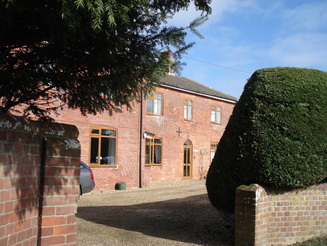 Gorrell Hill Farmhouse 2014
Gorrell Hill Farm - now called Farmhouse Cottage.  Arthur Greenhill lived here in the early 20th. Century and named it Dudley Farm after his son. In 1936 he sold it to Richard Hayward and the land was farmed by his son Duncan until 1945 when it was sold to Mr. Plaister for £7,500. Later on Wally Hicks bought it and changed the name to Gorrell Hill Farm after one of the nearby fields. 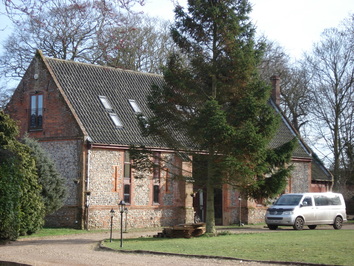 This is where the tithes (taxes in kind) were collected. It was thatched until a devastating fire in the 1980s. 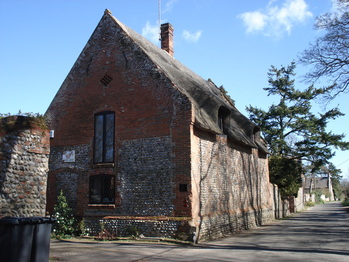 Thatched and flint listed barn in front of Ivy Cottage. It has the initials IP and 1727 on it and an unusual brick pattern.