The Harmers are one of the few Trunch families who have a memorial plaque inside the church. 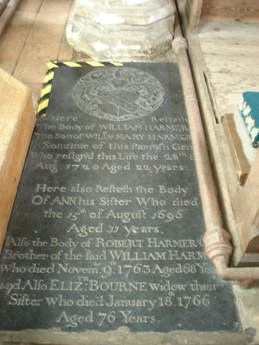 Harmer memorial
This memorial is to members of the family who lived in Trunch in the 1700s. Their father William, grandfather Robert and great grandfather, William also lived in the village with their families. They were a wealthy family with the first William recorded as having 3 servants in 1629 and others described as gentlemen or yeoman farmers.

The Record Office has the wills for Thomas (1660), Gregory (1667), Robert (1680), William (1698) and Robert (1763). Gregory is interesting as he was a bricklayer and 200 years later Robert Harmer was also a bricklayer living in Trunch. Members of the family did move around to different parts of Norfolk, sometimes while still owning land or property in Trunch.
HARMER as a Christian name. One slightly puzzling thing is why Harmer was used as a Christian name for Harmer Nichols who married Susanna Bushell in Trunch in 1766. The most likely explanation is that it was his mother's maiden name but I have not been able to verify that. However the origin of Harmer as a name probably came from a Norman having Harmer as a Christian name.
The censuses of 1871 and 1881 show a Robert Harmer working as a master bricklayer in Trunch employing 2 men, 2 boys and I apprentice. He was born in Southrepps but could well be a descendent of the earlier Trunch families. He and his family lived in Church Street, next to the Fuller's shop.  One of their sons, Herbert, was a real trial for the schoolmistress, behaving badly, not doing homework and playing truant. Herbert eventually moved to Great Yarmouth (where several Harmers lived) and became a sailor before going to Thurrock in Essex. Another son, George, was imprisoned for 28 days for breaking two windows in Mundesley but a third son John, however went on to be a bricklayer like his father.
A Sarah Harmer also had some troublesome children. She was from Aylsham but married Philip Storey and they lived in Bradfield. Two of their sons - George and Edward were imprisoned for a violent attack on a policeman in Swafield and eventually they and another brother, William, emigrated to Canada.
There were no Harmers recorded in Trunch in the censuses of 1901 or 1911, but a Michael Harmer was a member of the 1980 Tug of War Team in the village and there is still a Harmer family here.
Click here for my more detailed notes on the Harmers and here for a rough family tree

And if you have any more information or photographs that you would be willing to share please contact me.