Members of the REYNOLDS family have lived in Trunch since the 17th. Century up to today. One early family was that of James and Martha (nee Withers) who had at least 11 children born in Trunch, several of whom died in infancy, which was common in the early 1720s. Later a John married Sarah Wright in Swafield in 1789 and they had 6 children in Trunch. 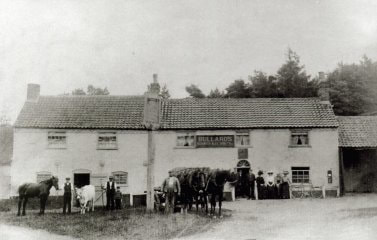 The old Bell pub in Oulton
One family of particular interest is that of Thomas Bell Reynolds (1774-1827) He was born in Oulton a small village a few miles to the South West of Trunch, where the BELLs were a notable family, having once been Lords of the Manor. The BELL part of the name came when Thomas's father Joseph married Lydia Bell. The local pub was at one time called the Bell or Three Bells, a reference to the Bell family crest. Thomas married Sarah Steward and they lived in Skeyton, where they had many children but only 2 survived - Lydia and Joseph. 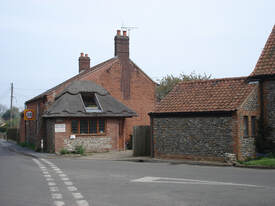 Trunch Tee Farm
Thomas Bell was a farmer and brewer and he owned the farm at Trunch Tee in the 1820s. When he died in 1827, he left the farm to his wife Sarah. She later married Robert Margetson and after she died in 1839 he took over the farm. The 1841 census records that Robert, now a widower, was living at Tee Farm with his stepson Joseph, Joseph's wife Mary and their 2 small children. Lydia was also still in Trunch with her young daughter, Sarah, but sadly a widow at only 28 and living with her in-laws in Chapel Street. Even more sadly in 1850 Sarah Reynolds Barber was mentioned in the Workhouse records and this was because even though her mother had remarried to John Soame, a baker in Norwich, in 1841, she died in 1842.  More happily Sarah went on to marry Robert Coan from Norwich.  Joseph unfortunately also died in 1842 and his 3 young children were brought up by their maternal grandparents but happily lived longer lives than their father or aunt.

In 1911 there were 2 Reynolds families in Trunch - those of Walter and Frederick who had both moved from Northrepps. Sidney Ambrose, a son of Frederick was living in Rose Cottage in Trunch in 1939 and working at Mundesley Sanitarium. In more recent times Reynolds often appear in Trunch sports teams and Stephen still works as a painter and decorator in the village.
If you would like more details about the REYNOLDS of Trunch or have anything to add please contact me.