Ezra  Duncan often appeared in crime reports in the 1800s and so I decided to find out a bit more about him. He was born in Trunch in 1834. His mother was Charlotte Duncan but no father's name was given in the records. In the 1841 and 1851 censuses he was living in Trunch with his mother and sisters and his widowed grandmother.

Ezra's parentage is interesting. His mother married James Duncan in 1829 in Trunch and both parents' names were given when his older sister was born in 1830. However for the younger children only Charlotte's name was given. What had happened to James? I cannot find a death record and Charlotte described herself as single not widowed.  It is unlikely that they divorced so did he just leave - joined the navy or emigrated? Whatever, his absence may have contributed to Ezra's crime filled life.
At the age of 14 Ezra was sent to the Royal Philanthropic Society Reform School in Southwark where delinquent boys were taught crafts. A year later the school moved to new premises in Redhill in Surrey where farm work was taught as well as crafts.

By the time Ezra was 16 he was back in Trunch with his mother but in 1853 he was sent to prison for 6 weeks for stealing two fowls. And when he was convicted the following year of stealing 7 fowls, it was said to be his third offence, and he was sentenced to 4 years penal servitude. I believe he was sent to Portland Prison where convicts were constructing the new naval dockyard.

Many of the convicts at Portland where transported but Ezra found his way back to Trunch by 1861 when he was sentenced to 4 more years for stealing a pony when he was drunk. He came back as a "ticket of leave man" which meant he had left prison early but was subject to certain restrictions. This didn't seem to stop him though as he was arrested in Alby in 1865  in a house with stolen fowls and he escaped while being taken to Norwich. After being recaptured he was charged but acquitted and later in the year when charged with stealing 11 woollen fleeces he acted as a witness against two other men. However the law caught up with him again in 1866 when he was sentenced to 12 months hard labour for stealing a calico shirt. 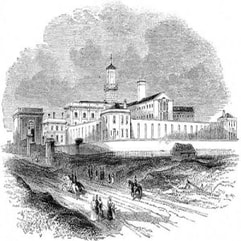 When Ezra was sentenced to 3 weeks hard labour for stealing a jackdaw from a garden in Sheringham he was described as "an old offender". However much worse was to follow when he was found guilty of stealing jet jewellery from a hawker and sentenced to 10 years penal servitude, this time in Pentonville. The judge said that he was such an habitual criminal that it was desirable that the county should be relieved of his presence for some time. 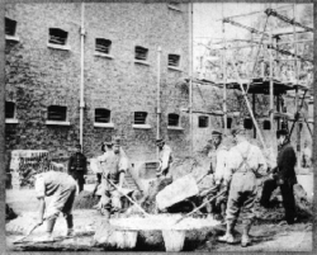 When he was released Ezra went to Yorkshire using the alias William Smith and was convicted of stealing a sheep skin. He pleaded guilty and got 10 more years in prison with 5 years police supervision. At first he was sent to Pentonville again.

Then he finished his sentence in Wormwood Scrubs, having served 10 years and 4 months. His discharge notes paint a sorry picture. He was said to be 5ft. 2in. tall, with dark hair and blue eyes and to have lost all but his 2 top teeth. He also had several scars all over him and he was going to the St. Giles Christian Mission when he left prison.
By 1891 Ezra  was back in Norfolk but staying in the West Beckham Workhouse. He died in Norfolk in 1902 aged 71. Although banns were read for his marriage to Maria Buttle in 1865 he never seems to have married or had children, which was probably a good thing.