Many RICHES were born in Trunch in the late 18th. Century and the 19th. Century. Most of the families seem to have descended from a Thomas RICHES  who married Mary Bensley in Norwich in 1783. It is quite unusual that they moved out of Norwich to the rural area of Trunch at a time when many farm workers were moving into Norwich for work in industry. Mary may have originally come from Ridlington, a small village near Trunch. They had at least 6 children and three of the boys went on to raise families in Trunch. The Riches families in Trunch are complicated because there are several of them with many common Christian names, however a few individuals do stand out.
Thomas' son James (1797- 1878) was a labourer and husbandman and lived all his life in Trunch. He married Mary Holmes and they had at least 12 children, including twins, who sadly did not survive. After Mary died he married Deborah Andrews. Three of James' sons had interesting lives in different ways - one being a soldier, one spending time in prison in Yarmouth and another being transported to Australia. 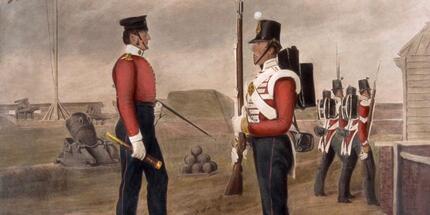 Duke of Cambridge's Own Middlesex Regiment 77th. Foot
William (1826 - 1902) joined the Duke of Cambridge's Middlesex regiment in 1843 when he was 19 and served for 21 years. His record states that his character and conduct were very good and he served in the Crimea, Sydney and the East Indies, earning several medals. In 1847 he married Ellen Connor in Tralee, Ireland. This was at the height of the Irish Potato Famine and it may be that he was stationed there at the time. In spite of his travels he and Ellen had at least 4 children, a daughter whose married name was Bunting, a son William who also joined up as a soldier when he was only 14, and sons Thomas and James. After William retired from the army he worked as a coachman and the family lived in Yarmouth, Antingham and finally Aylsham. 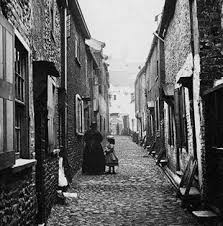 A Yarmouth Row
Isaac (1830 - 1907) was an agricultural labourer in Trunch in 1851, married Elizabeth Harman from Southrepps in 1853, had 3 children, and had progressed to working as a maltster for Mr. Greenhill when disaster struck in 1864. He was found guilty of stealing a peck of malt (a pot full) and sentenced to 9 months imprisonment. In 1971 Isaac was in Middlegate Gaol in Yarmouth so presumably there must have been another offence. His wife and 5 children were also in Yarmouth living in one of the rows - narrow streets. There were at least two other offences; in June 1871 he was convicted of larceny and given 6 months hard labour and in 1872 when he was charged with stealing linen. After his release from prison Isaac and family remained in Yarmouth with him working as a general labourer. 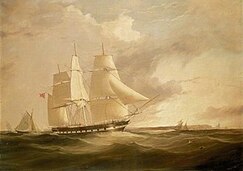 Convict Transportation Ship
Things were even worse for James' son John (1821-?) He was sent to prison several times - in 1839 for 3 months for stealing a donkey (he was 17), 3 months for larceny in 1841 and when in 1844 he was convicted of stealing a sheep from a farmer in Bradfield he was sentenced to 10 years transportation to Tasmania, Australia.  The ship left London in April and arrived in Hobart 4 months later. There were 262 male convicts on board and 2 died during the journey. John did not settle very well into life in Tasmania; he absconded and was recaptured at least 5 times. He was granted conditional freedom in 1852 but I don't know what happened to him after that. 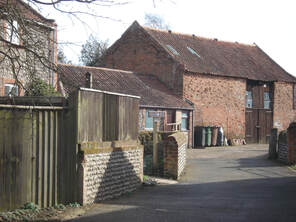 Robert (1791 - 1849) another son of Thomas had a more ordinary life. He married Elizabeth Butcher from Suffolk in 1824 and they had 5 children, 3 of whom died at young ages, but Isaac became the Trunch barber and Isaac's son was John the farmer at Dairy Farm.