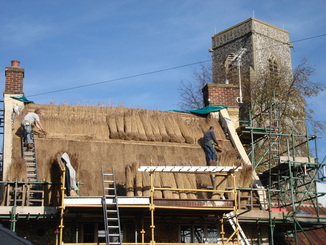 Modern-day thatching in Trunch
The first member of the Gibbons (Gibbins) family that I have come across in Trunch was William who was born in Knapton in 1788 but was living in Trunch after he married Mary Wegg from Trunch in 1813. William was a thatcher by trade and he and Mary had a large family of at least 6 boys and 2 girls. Two of the boys also became thatchers, while the others followed different crafts.


Eldest son Richard became a shoe-maker and was also at one time an inn-keeper. The next son William was a carpenter and wheelwright and it was his sons, William and Walter, who carried on this tradition in Trunch for many years. A view of the carpenters' shop can be seen on the buildings page, as can photographs of some of the properties that the Gibbons lived in.
Another of William senior's sons was John, who married Ann Lynes and became a blacksmith in Happisburgh and Walcott, while son Timothy married Tamasin Larter and worked variously as a labourer, thatcher, warrener (catching rabbits) and later as a gamekeeper in Thorpe Market - possibly on the Gunton Estate. Their brother Thomas had an equally varied career as servant, and thatcher and in 1881 he was a farmer of 60 acres and a publican in Edgefield. Finally Robert was a warrener, and he also lived in Gunton and Thorpe Market as well as Roughton, where his wife came from. Meanwhile of the two daughters, Jane married James Martin, a blacksmith and although Mary was living at home with her mother until 1861, when she was nearly 40, I think that she may have married after that. There is one sad fact in the records in that in 1858 five members of the Gibbons families in Trunch died; it may have been as the result of a flu outbreak. 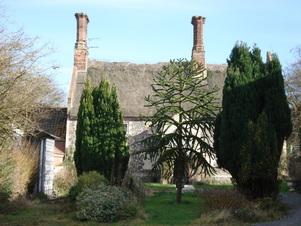 Hall Farm, Trunch
The Gibbons family prospered from their trades, often employing others and owning property. The next generation were particularly successful, with Walter marrying Ellen Buck, living with her farmer father at Hall Farm and working as a builder.

William meanwhile progressed from being a carpenter to a farmer, owning the Laurels in Chapel Road and then farming in Bradfield in 1911.

A few of the Gibbons left Trunch in the 19th. Century to find work - John (born 1844) was a carpenter and furniture dealer in the London area and Walter (born 1856) who was a gamekeeper in Norfolk became a farmer in Kent.

The trade directories of the early 20th. Century record the Gibbons brothers - William, Robert and Walter as builders and blacksmiths and by 1922 Frederick from the next generation had joined them as carpenter, wheelwright and undertaker. Walter meanwhile was the owner of the 150 acres of Hall Farm by 1929.

One of the family witnessed a distressing incident during the Second World War when an aeroplane crash-landed near Bridge Farm in Bradfield, which was the home of William and Matilda Gibbons and their son Jack. The plane caught fire but all of the crew escaped and were given tea and sandwiches at the farm. Unfortunately William and Matilda both died a few months later, within 7 days of each other, and they are buried in the Trunch Cemetery.